A River in Germany 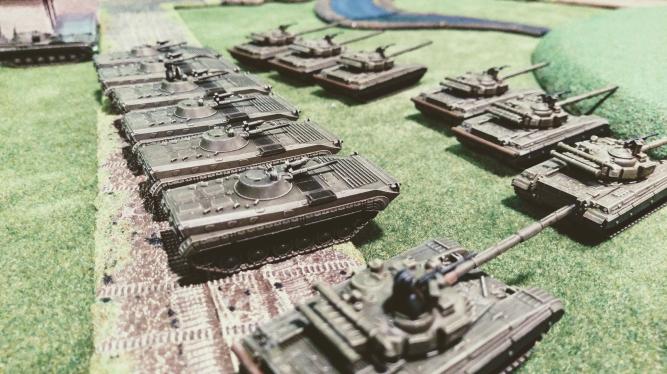 Tanks and motor infantry vehicles await on their start line, the morning of the attack.

Sergeant Alekseev stood at ease as he watched his captain march back in the early morning darkness to his waiting command tank, a squat, rain-soaked silhouette that glistened in the poor artificial light of the farmhouse. In the shadows beyond he could see flashes of torchlight from overworked three-man crews making their vehicles ready for the hours ahead, checking and re-checking the slick hulls of their T-64 main battle tanks - cursing in every dialect he knew, and some he did not. There was a hollow clang as another external fuel tank, empty now after their rapid redeployment, was jettisoned onto the earth.

Behind him in the farmhouse he could make out the crash of furniture and tinkling of broken glass, as his platoon of motor infantry cleared every nook and cranny of the building, shouting challenges in an awkward, pamphlet taught brand of German. Its occupants, the sergeant wagered correctly, had long gone.

It was 4am, and Alekseev had been given his brief. American reinforcements were probing the lines all across the front, seeking, it was assumed, for a way through to their embattled comrades in Leipzig proper. The 22-year-old sergeant and his under-strength motor rifle company had been shaved off of their parent battalion, and pressed into an ad-hoc battlegroup alongside an equally battered battalion of armour. Together they were being rushed into a gap in the sector, plugging the narrow hole against what was expected to be an imminent American counter-attack all along their front. Should the Americans succeed there was a real risk of a gash being opened through the Russian front, a bloody wound into which would pour enemy materiel and men.

Alekseev slung his AK-74 rifle over his shoulder, pulling a soggy packet of cigarettes from his chest pocket. Two left, he thought to himself, as he lit the battered Soviet tobacco. He rubbed his tired eyes with the heel of his palm and moved towards the farmhouse to gather his boys.

Behind him the command tank’s diesel engine roared to life, joined in harmony by a dozen others. It was time to mount up once again. 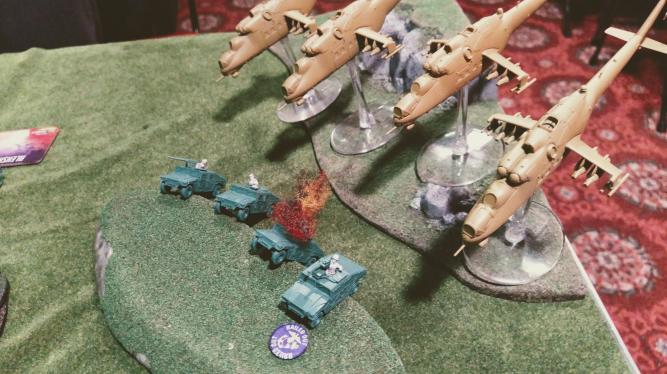 Tchaikovsky's flight catches the American cavalry in the open.

Flight lieutenant Tchaikovsky felt the airframe around him vibrate as his gunnery officer sent another burst of 12.7mm tracer into the American vehicles below, the Hind-D attack helicopter fighting with him at the stick as he banked hard for another pass. The lieutenant noted with dispassionate approval that another smoking ruin had joined the others on the bank of the hill. He flinched as a staccato clatter echoed in the enclosed cabin, as the defensive fire from the American 4x4s grew more accurate. The element of surprise had worn off, but with the friendly ground forces advancing to contact and rounds left in the magazine, he opted to press his advantage as hard and long as he could. The Yak-B rotary cannon barked eagerly as he levelled out with his flight; Tchaikovsky could make out Red Army tanks barrelling across hills to the North East through his night-vision equipment. There was a sunburst as one of the 38-tonne vehicles halted briefly and fired its 125mm cannon, the round impacting with force into the opposing slope of the enemy-occupied hill. His radio was alive with chatter as his flight called out effects on targets – another light truck blossomed into flame beneath them as its onboard anti-tank munitions detonated.

The flight lieutenant pulled back on his control column, lifting the big helicopter out of its shallow dive. The Hind banked left on command, bringing his partner in a second aircraft into view on the inside of his flight path. 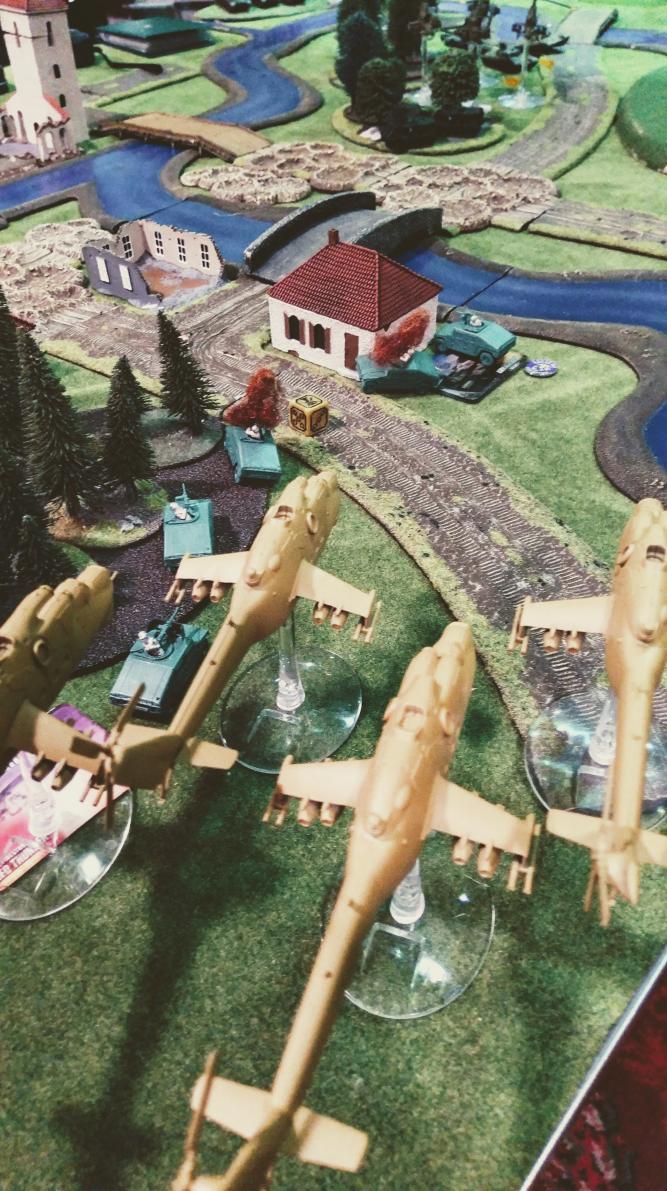 The flight continues to harass the column of light vehicles. The attack would go unanswered until the American anti-air battery rushed onto the scene.

Suddenly, a laser-line of tracer appeared to pass through the fuselage of the second Hind in a flash of sparks. Tchaikovsky’s heart felt as if it had fallen out the bottom of the cockpit as he watched the chopper plummet sideways into a field below, belching smoke and fire.

A shout came over his headset: ‘Triple-A! Triple-A!’

Instinct took over, and he ordered his flight to break off and disperse, but the very air around them had turned into a lightshow, as lines of fast-firing tracer danced in the sky about them. He jinked the airframe left and right; sweat stung his eyes, his teeth were clenched so hard he thought they might break. Somewhere behind them, another Hind smashed into the earth like a meteor. There was a sound like tearing steel, and Tchaikovsky lost control, the airframe spinning madly around its central axis as the tailboom disintegrated in a hail of lead. He braced against the canopy as his Hind tumbled out of the lightening morning sky, a Catherine wheel of metal.

The ground shuddered, and the flight lieutenant disappeared in a ball of fire. 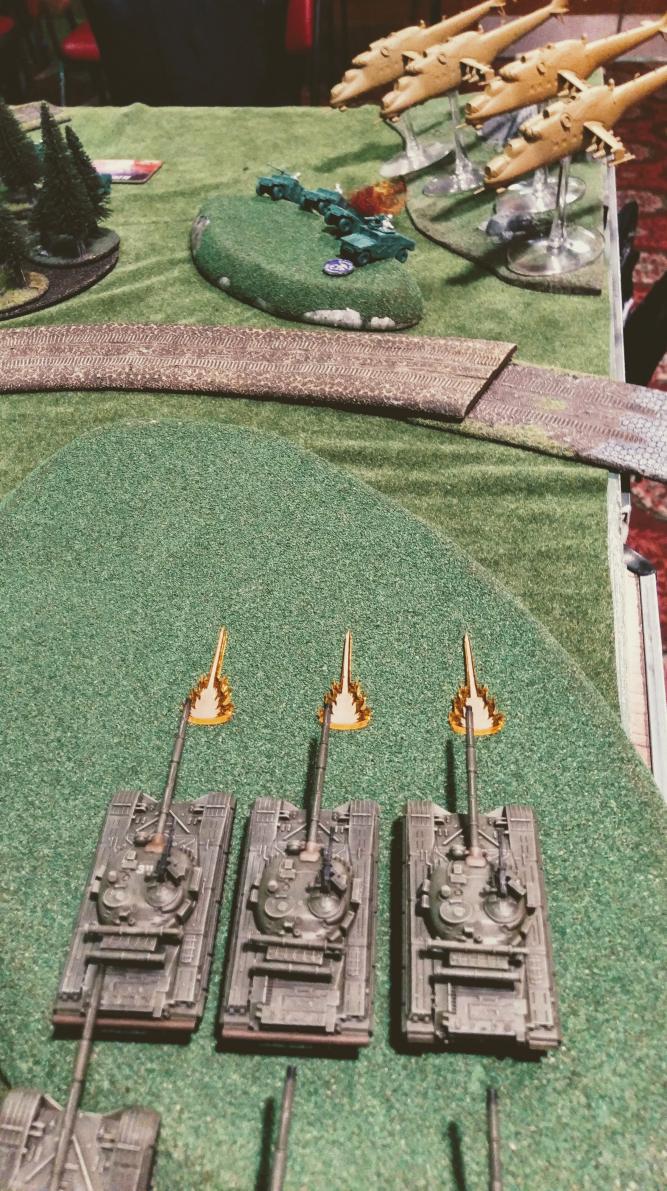 Battalion T-64s fire on the move under the withering covering fire of Tchaikovsky's doomed attack helicopters.

‘Dismount! Dismount! Everybody out!’

Alekseev shoved the last of his squad out of the stifling confines of the BMP, the hull rocking as the gunner let loose another HE round. The sergeant threw himself into the cold morning air, the grey light of a new day only just spilling across the sodden bank of the river they had just crossed not moments before. His men had spread out in a staggered line parallel to their vehicles, LMGs spitting rounds into the trees ahead of them as the riflemen fired smoke shells from underbarrel grenade dischargers. Alekseev dashed for the centre of the column, urging his men as he went.

‘Wait for the smoke,’ he bawled over the din. The captain and his tanks were rumbling past somewhere off to the South, the crack of their cannons splitting the air with each shot. The battle had reached fever pitch with the rising of the sun, an absolute cacophony of gunfire and explosions. The BMPs were breaking off to the right, firing into enemy concentrations at the brow of a shallow hill nearby; across the river behind them a Shilka battery was tearing through ammunition at some distant target; somewhere beyond the trees in front of them could be heard the shouts of men, and the drumbeat of heavy machineguns. The battalion had got what it bargained for – they had crashed headlong into the vanguard of an American cavalry division. The smoke in the treeline thickened to an opaque smog. 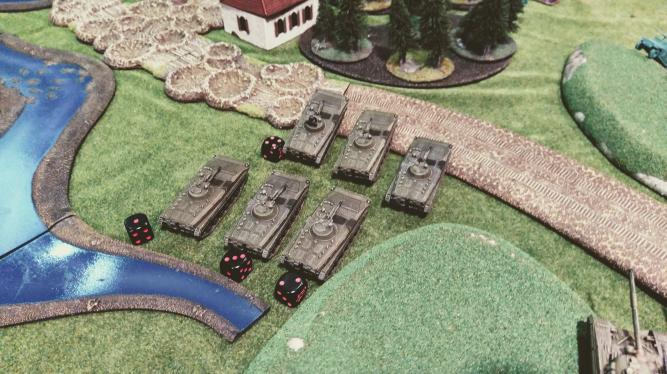 Alekseev ordered his first and second squads into the woods. They charged unmolested into the trees, disappearing into the smokescreen. The sergeant waited a beat for his men to get into a covering position.

He and the remaining squads struggled to their feet and broke into a run, closing the distance in seconds. He could hear rounds pinging off the bodywork of the BMPs as they worked their way up the slope on their right flank, and was relieved for the cover as he burst through the smoke into the darkness of the foliage. There was a burst of brilliant light ahead of them, and then a thunderous crash as Russian artillery units to the rear finally brought their guns to bear. Alekseev felt a wave of elation overcome him with each shellburst. They were pouring everything onto the American position; nothing would stop them now. 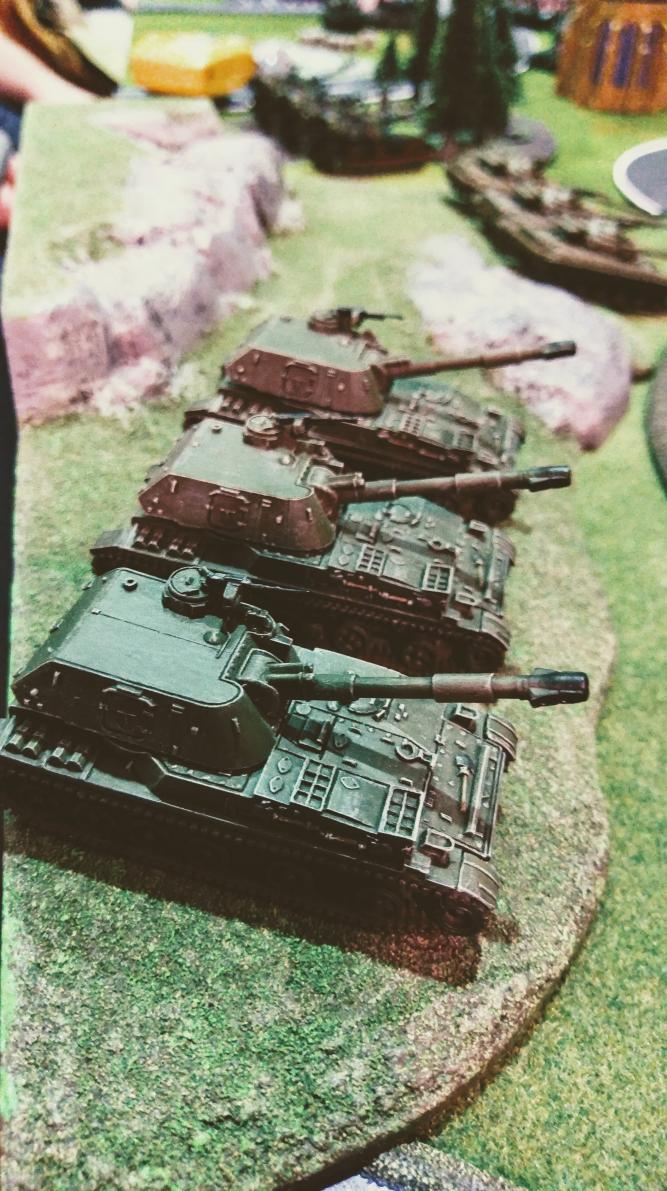 A battery of Acacias join their fire in aid of the attack, helped in no small part by the rapid redeployment of their forward observer.

As the barrage lifted, Alekseev compelled his men forward. They charged like men possessed through the trees, bayonets fixed, and out the other side. A hellscape awaited them, American dead littering the road beside their burning vehicles, some twisted beyond recognition. Through the lingering dust and smoke of battle, the sergeant could make out a broken stream of US tracks and light vehicles moving away at speed down a pockmarked country road – back the way they’d came. A vicious anger overtook the Russian NCO.

‘Keep going to Berlin, you bastards,’ he roared after them, the madness of fear and adrenaline in his eyes. ‘You will die where we destroyed the fascists before you!’

As quickly as it had started, the east bank of the river had been secured. 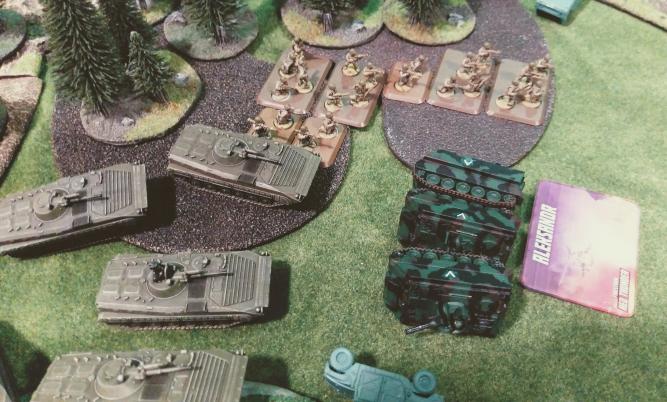 With their position in tatters, American morale finally breaks, and Alekseev and his men push onto their objective uncontested. A closer battle has never been fought.