The Soviet advance has stalled. The armies of the free world dig their heels deeper into the dirt, and every mile of ground seized is paid for in Russian blood and steel. With NATO reinforcements of men and materiel pouring onto the continent, the Warsaw Pact forces redouble their efforts as only they can, counter-attacking ferociously with a bloody-minded zeal. Vanguards sweep before the vast Soviet host, probing for weaknesses in the NATO defences, exploiting gaps with ruthless efficiency – and suffering terrible losses every day for their craft.

In the suburbs outside Hamburg, a quiet village – untouched by the fighting – erupts as one such vanguard advances into the jaws of a West German ambush. 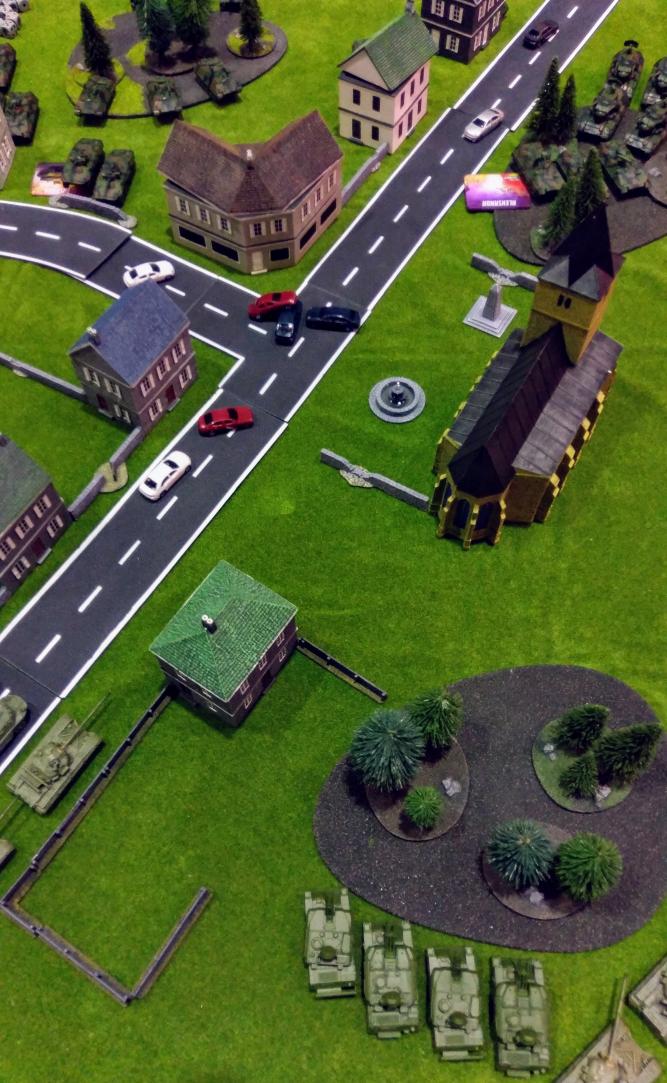 A village on the outskirts of Hamburg. The road junction and church were focal points of the devastating fighting.

Private Viktor Antonov peered through the gunsight of his heavy machinegun, sweeping the road ahead for signs of activity. The sky had drawn closed over them, and a sickly grey light cast the tiny parish village about them in a depressing hue. They were advancing slowly, the rubber wheels of the BRDM reconnaissance platoon crunching gently along the rough tarmac road towards the heart of town; occasionally the lead vehicle would swerve slowly around an abandoned civilian car in their path, likely siphoned dry of whatever gasoline remained before its owners fled towards Hamburg proper. Viktor could make out a cluster of cars further ahead past the lead vehicle, clumped together at an approaching junction, their chassis locked together and smoking gently. The evacuation of the civilian populace had been frantic and incautious, even in a relatively untouched hamlet such as the one they were in.

As the platoon of vehicles came up on the church at the road side, the young and deeply superstitious gunner found himself very self-conscious. He hoped privately that whoever had once called this place their home found themselves back here before long – no matter what politics ended up governing it. 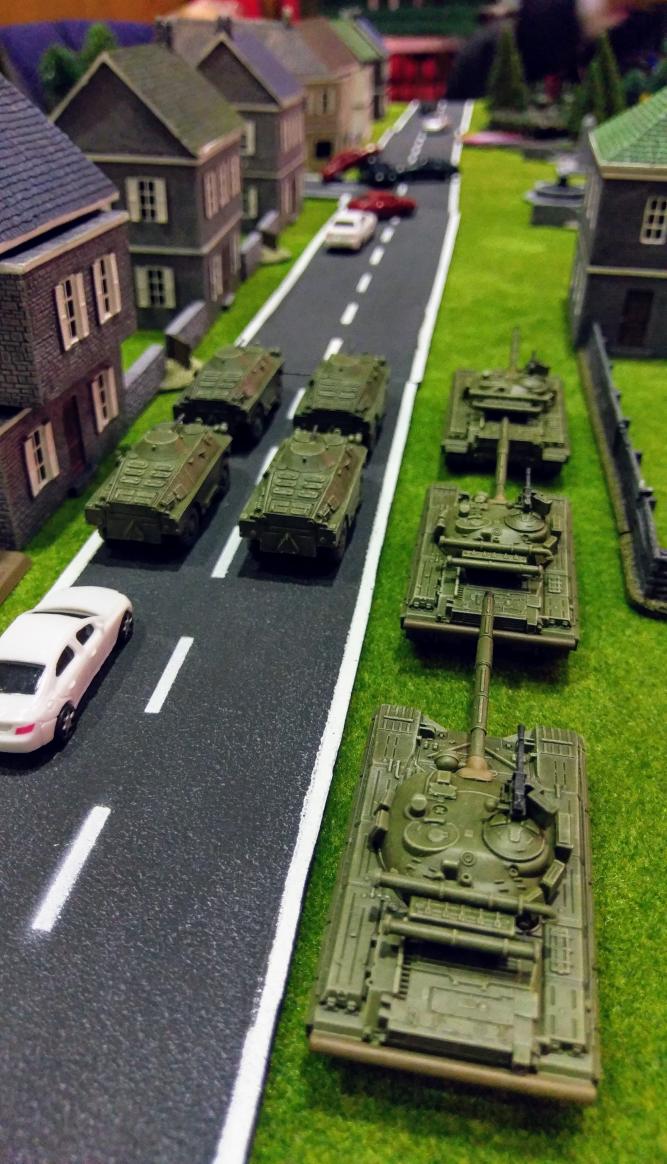 The battalion reconnaissance element moves into the village, while a T-64 company stands-by at the roadside. The junction and infantry-occupied building can just be made out in the distance.

Without warning the lead vehicle halted, and a burst of activity through the local network was drowned out as it canted the barrel of its heavy machinegun up, and began releasing bursts of 14.5mm rounds into the corner building overlooking the junction. A slap to the back of Viktor’s leg and shouted command was all the encouragement the private needed, and he very quickly brought his own weapon to bear on the upper floor of the target building, obscured as it was now by the dust of pulverised masonry. He depressed the trigger and felt his teeth rattle as the big weapon joined fire with the rest of the platoon. Viktor fought to keep the crosshairs effectively over his target as he felt his vehicle accelerate backwards down the road. The lead BRDM at the periphery of his gunsight shuddered and jerked as a fusillade of heavy cannon rounds bored through its flank; the hatches flew open a moment later and a single man flopped out onto the ground, smoke and flame following him as internal fires ravaged the cramped interior of the lightly armoured vehicle. Viktor felt a numbness overcome him, and became only dimly aware that he was praying aloud when his weapon went silent, depleted of ammunition. He peered across at his comrade frantically working the loading mechanism and felt for a moment as though he were dreaming.

The 19-year-old private died instantly when a West German cannon round penetrated the wall of his turret, ending his war in a small village he had yet to learn the name of, hundreds of miles from home. 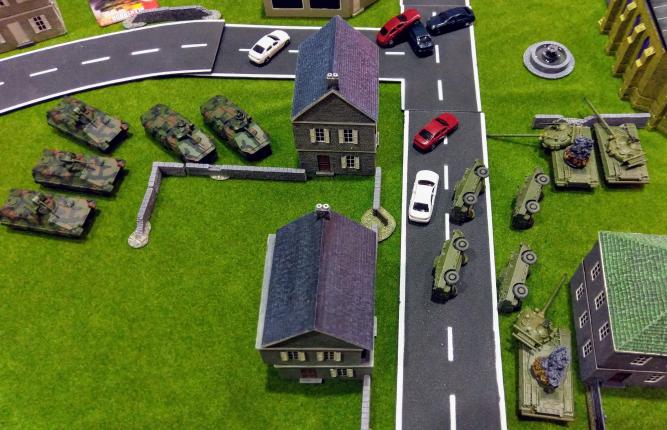 The BRDM platoon lies in ruin after taking merciless flanking fire. To the right, by the church wall, are the remnants of first company, who found themselves under crippling MILAN fire.

The T-64 tank’s diesel engine roared to a crescendo as it bounced across the pulverised graveyard in the wake of the fast moving BMPs, racing to get into a flanking position beyond the church. Captain Evgeny Zima braced himself against the hull of the turret, listening through the clatter as reports from his first tank company came in of their ongoing engagement with infantry and light armour on the main road into town. His reconnaissance vehicles had been caught in a devastating cross-fire and wiped out in a matter of moments, and his lead company’s tanks were pinned by heavy fire from ATGMs in positions further down the road. He had ordered the bulk of his tanks and AFVs out of column and into a staggered line of advance up the right flank of the village, off-road, using the prominent church to screen their rapid movement.

Zima ordered his first company to return fire and – in no uncertain terms – fend off any counter-flanking attempts on their left flank. He was acutely aware of how vulnerable his self-propelled anti-air battery was positioned just outside town to the rear, and it was imperative they maintain their umbrella over the battalion in the push towards Hamburg. 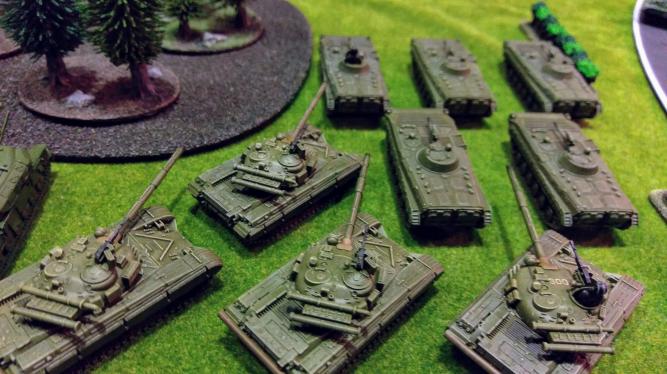 Captain Zima and his second company advance behind an ad-hoc pathfinding platoon of BMP-1s. Their plan to advance into a flanking position through the churchyard was met by a withering fusillade of enemy fire.

The captain switched back to the local net just in time to hear a shouted alert – ‘Contact front, in the trees!’

The woods they were advancing towards past the burial grounds spat fire as a hail of heavy tracer erupted from the treeline, causing the lead BMP to lurch to a stop as rounds tore through its front armour like tissue paper; a second vehicle suffered the same fate almost as quickly as the first, its tracks being blown apart in a shower of stressed metal. The remaining BMPs swerved in unison off to the right, returning inaccurate fire as the muzzles of their 75mm cannons jumped around erratically, their host vehicles crashing through tombstones and other uneven ground at speed.

The first volley of fire from the West German positions in the trees takes its toll on the lightly armoured BMPs. They would regroup quickly and push on towards the trees with cover from the T-64s following, but to no avail.

The BMPs were now out of Zima and his second company of tank’s line-of-fire. The captain ordered his company to send rounds into the trees, though the limited vision of his periscope meant he could only make out dark shapes between flashes of cannon fire. The report of four 125mm tank guns firing almost in unison was deafening – Zima could feel the vibration of each volley through his skull as he kept his eyes jammed against the periscope of the tank, and cursed with satisfaction as a round found its mark beneath the trees in a spectacular explosion. His elation was brought crashing to the ground, however, as they emerged from the cover of the church. The unmistakable flash of a missile crossed not five feet in front of his rapidly advancing tank, destroying a T-64 of second company and sending its squat turret into the sky in a pillar of expanding fire.

Zima screamed at his driver to take evasive action, but had the wind knocked out of him by an almighty explosion that threatened to shake his command tank apart, and very suddenly the world went dark. 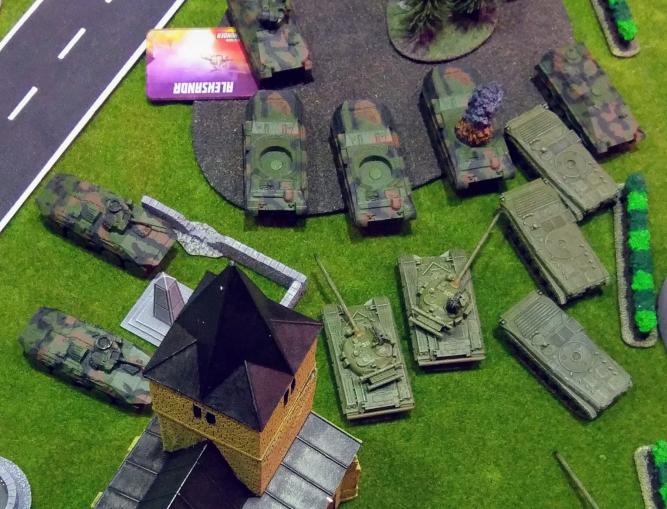 Zima's command tank and the remaining vehicle of second company, moments before ATGMs fired from a nearby house knock the commander out of the war.

Captain Zima was alive. He could tell by the immense shooting pains in his chest and by the taste of warm blood in his mouth. The dead do not hurt. The inside of his tank was pitch dark, the modest internal lighting without power, and he could smell the acrid fumes from the breach. He untangled himself from the floor of the turret with difficulty, and climbed up onto his chair with a heave. He called out to his crew – each by their first name – and received no response. Outside the sounds of gunfire lingered in bursts, and somewhere in the distance was the thump of rotor blades from an overhead chopper. Friendly or enemy, he knew they were too late.

Zima reached up with a shaking hand and released the lid of his cupola with a tug, its sprung hinge lifting the hatch open under tension. Light poured into the compartment, and Zima squinted up at a darkening grey sky. He could hear the roar of burning fires now, and the barks of German commands in the distance. The shooting had stopped. The tall spire of the church was just visible, he noticed, and scoffed like a good communist should at the thought of dying in the shadow of a house of God. He decided he wouldn’t.

With a sigh, Evgeny Zima slumped into his chair, and waited as the German shouts grew closer.