This fight is part of a mini-campaign that includes "Melee at Milzau". In a narrative sense, these two battles were fought nearly simultaneously to accomplish a single mission. 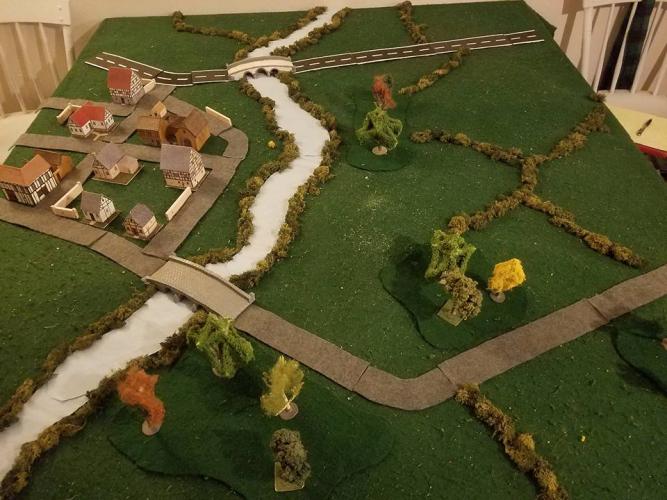 View of Schkortleben from the South

Captain Brinkman was tired. So tired, his bones hurt and the very hair on his head throbbed with a dull ache. And to make matters worse, there was a real chance his supplies were going to be cut-off. The Soviets had blocked the Hof Corridor, so everything had to be brought overland from the beach-head in northern Germany—a long way from here. This new supply route had to be secured quickly, or the advance to Berlin would stall, be encircled, and destroyed in detail. It now fell to the Big Red One to make it happen. Or more specifically, Apache Company of 1st Brigade.

Advancing north along Route 9, Apache Company was to turn hard left and secure the Saal River bridge at Schkortleben then move to link up with Marines advancing from Hanover along Route 38. Brinkman did not like river assaults. They were tricky and messy, even when handled properly and everything goes according to plan. And Brinkman’s plan was risky. 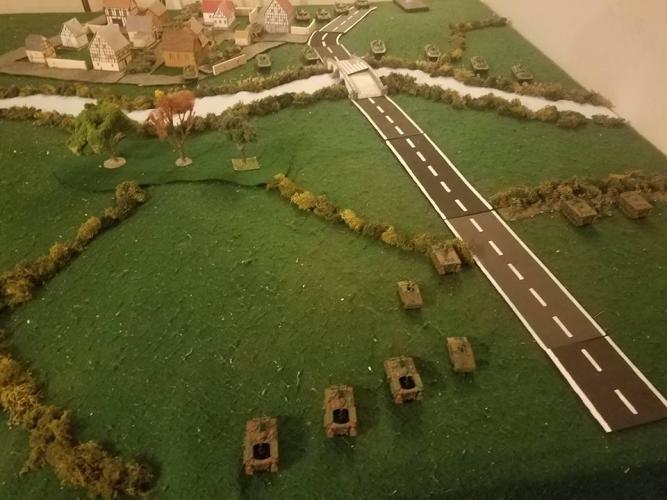 Ball's 1st Platoon and the Mortar Section opposite the Upper Bridge

Apache’s main body would attack directly into the village. Lieutenant Ball’s 1st Platoon is to advance straight down Route 38 to secure the main bridgehead; three M-106 mortar tracks were to provide Ball with fire support. Lieutenant Glover’s tank platoon, on loan from 3-66 Armor, will push for the secondary bridge south of Schkortleben with Lieutenant LaBoyteaux’s Scout section, now riding in Humvees because the division was losing 113s and ITVs at an alarming rate. 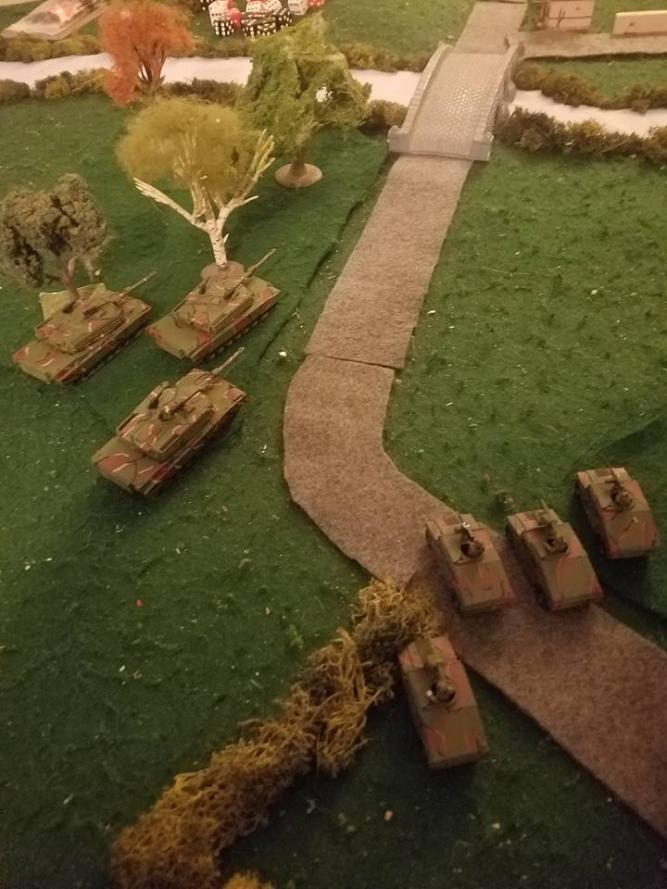 Tanks and Scouts opposite the Lower Bridge

Another attack would come from the flank with Lieutenant Nguyen’s 2nd Platoon, an Air Mobile platoon from 1-41 Infantry, and a section of Vulcan Air Defense vehicles. They were to cross the Saal downriver and attack from the south. Whichever attack gained the most ground would become the focal point.

Sergeant Parker’s Stinger teams provided anti-aircraft cover for the company just forward of the mortars, behind a tree-line 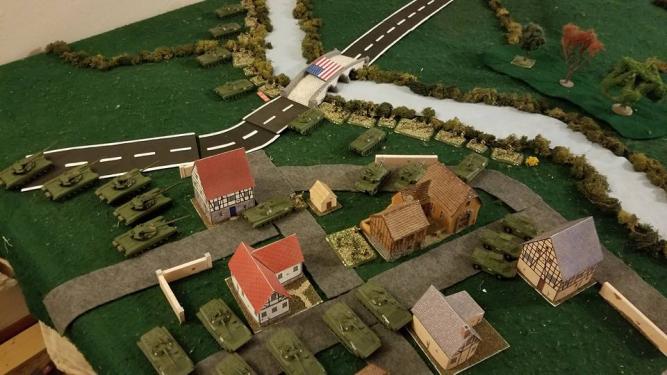 These attacks were simply a demonstration. Brinkman did not want to risk his men’s lives needlessly. He only needed to occupy the enemy long enough and prevent them from turning on the Marines coming from the northwest. He was sure they would retreat before their line of retreat was cut. He just had to wait them out.

The first shots were fired by his Abrams attachment. Having closed the distance to the Lower Bridge, they engaged a group of BMPs and Spandrels, but scored no hits. Equipment was starting to fail.

Ball’s platoon opened fire at long range on the right flank, with Dragons killing two BMPs and damaging a third on the far bank of the river. The machine guns of the 113s pepper dismounted infantry with heavy, 50-caliber rounds, scoring several hits. The mortars joined in with their own mischief, killing more Soviet soldiers. 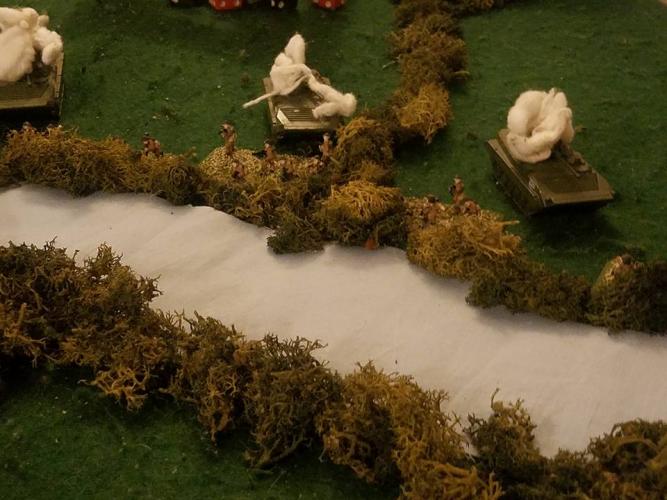 Over the fire support net, Brinkman overheard Lieutenant Stovall, his Fire Support Officer, working up a mission. He peered through his field glasses toward the center of town and witnessed three more BMPs and two Shilkas ripped apart by Copperhead artillery rounds.

So far, so good, he thought. 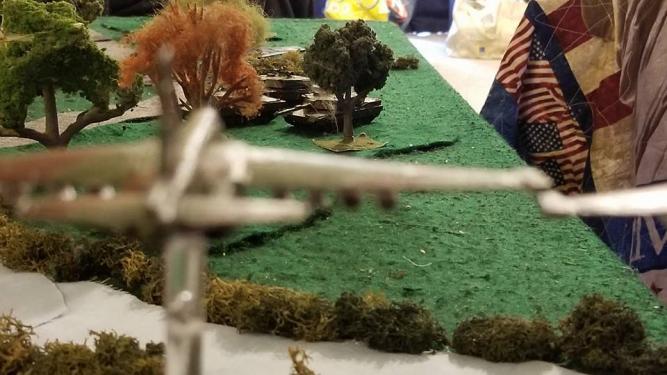 Lieutenant Glover reported movement across the river just above the Lower Bridge. A platoon of Spandrel BRDMs was moving to engage his Abrams. As nervous as Glover sounded over the radio, it was the roar of jet engines that worried Brinkman. Two Su-25s were lining up an attack run on Glover’s platoon. 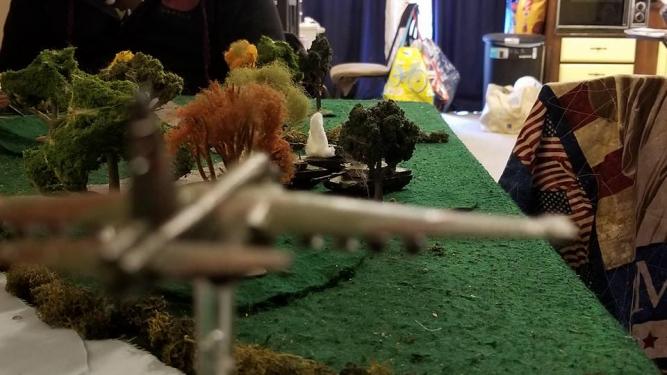 “Delta 3!” Brinkman yelled over the radio, “Get outta th….” Before he could finish his sentence, one of the valuable tanks erupted in a ball of flame. That was the first Abrams his brigade has lost, Brinkman noted mentally. That’s the first Abrams I’ve lost. 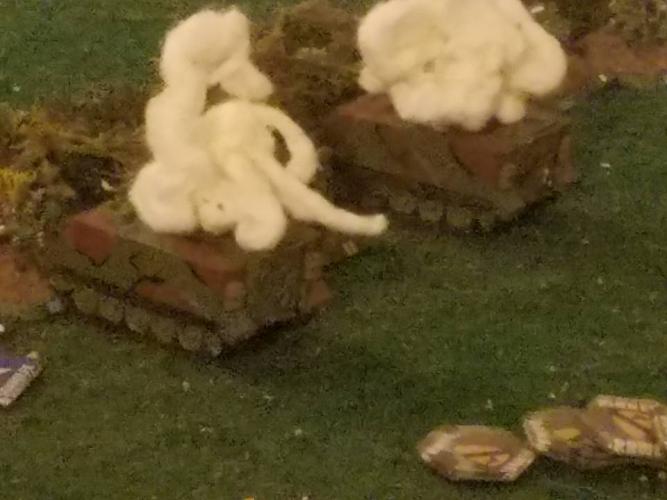 On the right flank, Ball reported the loss of his last two 113s. We’re all gonna be walking before this thing is over, thought Brinkman as he watched smoke roll out of the wrecked vehicles.

But the Soviet commander made no further moves to counter Brinkman. He must be thinking the same thing, he mused, stalling for time. 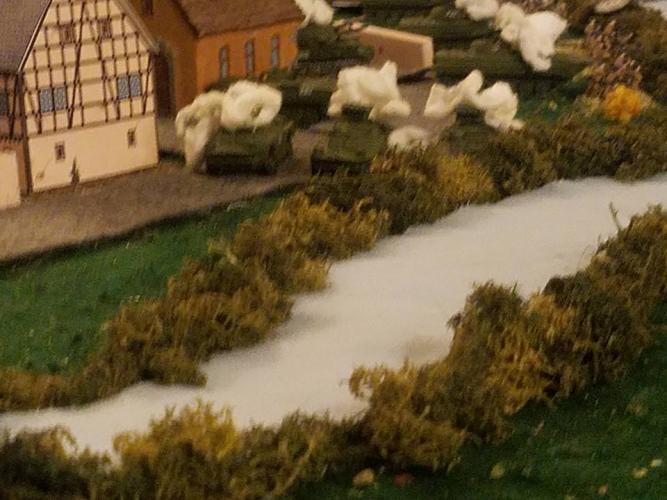 Nguyen and the VADS suddenly appeared on the opposite bank, south of the village and engaged enemy BMPs. Glover, now recovered from his initial shock, moved his remaining tanks forward to support Nguyen, knocking out the Spandrels and another BMP. LaBoyteaux’s TOW vehicles made wrecks of another two BMPs as he directed a section of Cobras from Assassin Troop, 1-6 Cav, to take up position behind him near a stand of trees. 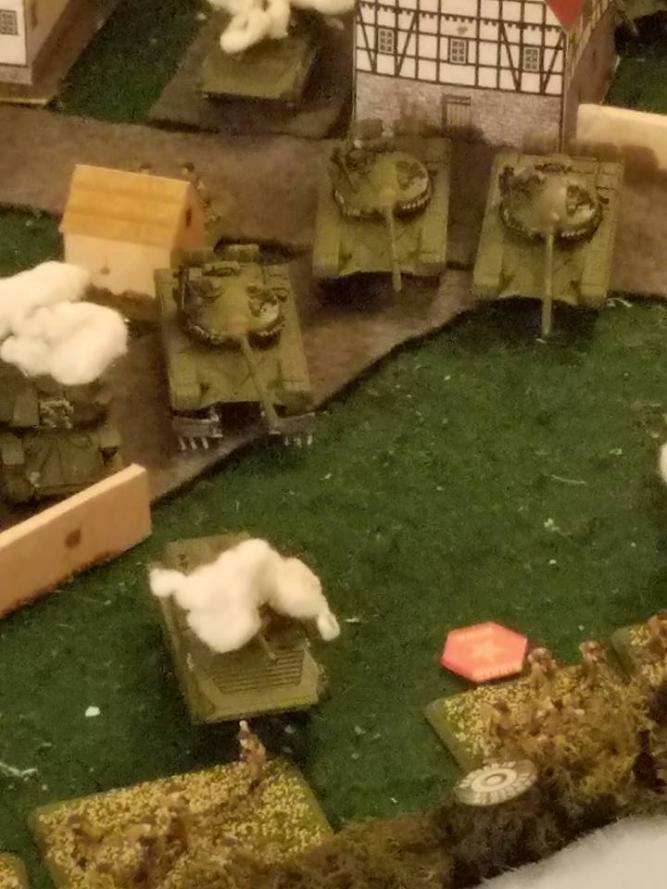 Ball continued his long-range duel with dismounted infantry, knocking out two more BMPs near the Upper Bridge. Lieutenant Heintzman’s mortars continued pounding away at the infantry across the river.

The enemy was now roused into action. T-72 tanks appeared on the northern edge of the village, close to the Upper Bridge. They were after very specific game, blasting away at Stovall’s FiST-V and reducing it to scrap. Fortunately, Lt Stovall had dismounted his team, but their comms and laser designator were destroyed or damaged by the barrage. 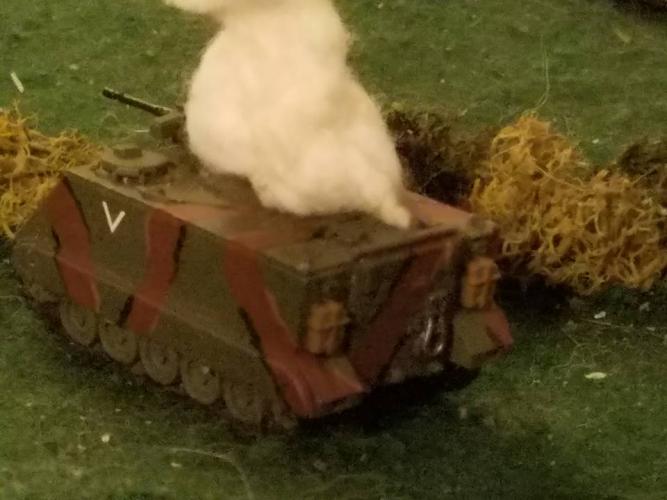 Stovall's track is knocked out

Dismounted infantry begin to move against Nguyen’s 2nd Platoon, supported by fire from their BMPs. With the VADS and 113s knocked out, Nguyen braced his men for the inevitable assault. And it did come, but was quickly repulsed, leaving several Russian soldiers lying dead in the grass. 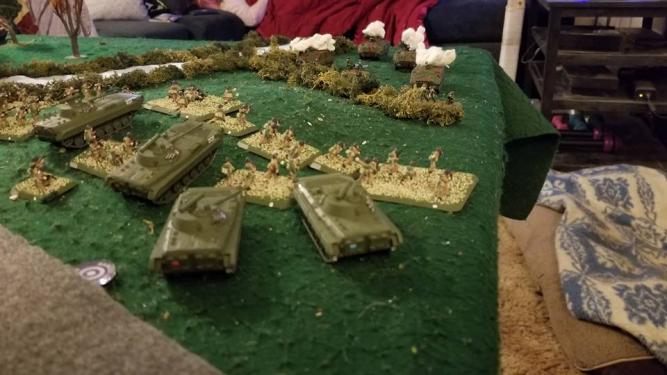 Soviets prepare to assault near the Lower Bridge

A-10s arrive on-station. Brinkman felt a measure of relief knowing his now had Cobras and Warthogs, but he still needed to deal with any potential AA threat that may still remain. Lieutenant Plumb-Martin, of D Company, 1-41 Infantry (Air Mobile) joined his platoon with Nguyen. With the influx of fresh men, 2nd Platoon began their own attack, pouring rifle and machine gun fire into the withdrawing Soviet infantry. Adding injury to insult, Nguyen dropped FASCAM bomblets onto the retreating enemy, exacting a heavy toll. Glover’s tanks pressed their advance, moving over the Lower Bridge. LaBoyteaux directs the fire of the Cobras, killing another BMP. They are losing APCs faster than we are, thought Brinkman. Who’s going to run out of ‘em first? 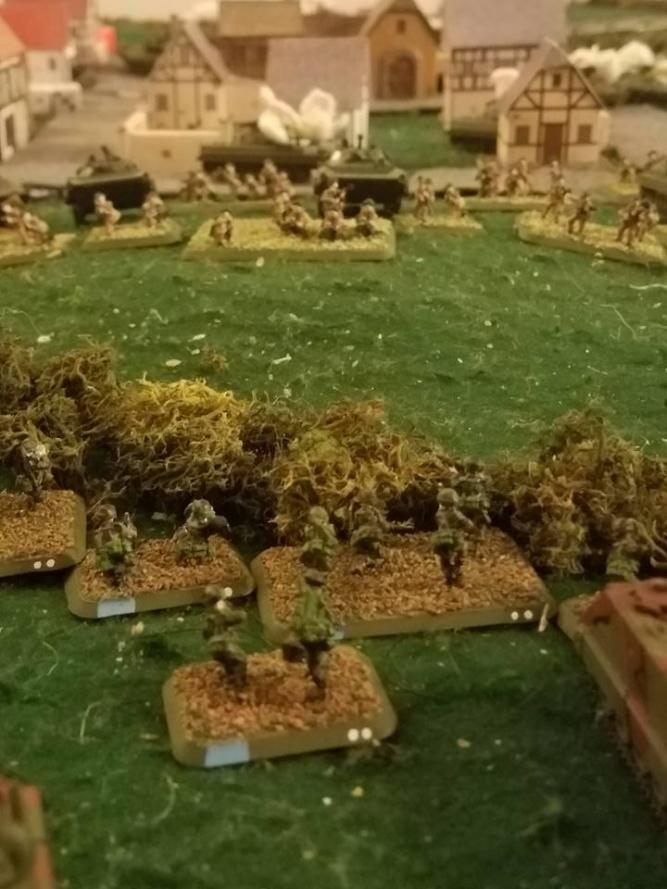 The Russians near the Lower Bridge continued to withdraw back into town. They are either beaten, or something very bad is about to happen. Then something bad happened . . .

Russian Hinds made a bee-line for Parker’s Stingers, hoping to unleash a hellish fury on the light-skinned Humvees. The Su-25s made another appearance, targeting the Cobras to the southeast. Gremlin missiles flew out of the town center, heading straight for Assassin. 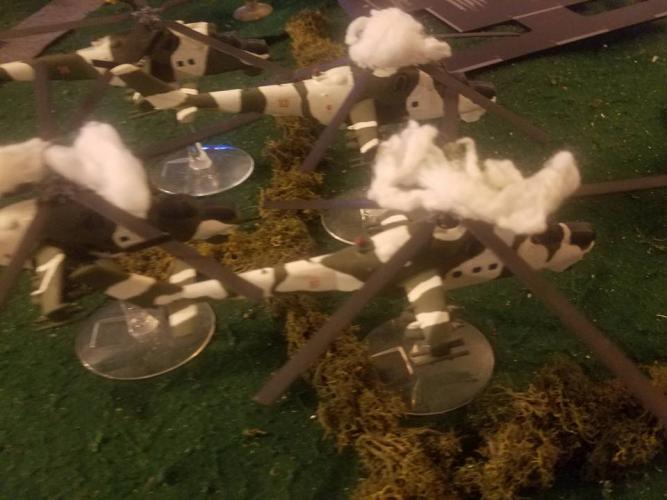 What happened next is a blur in Brinkman’s mind. Missiles and tracers crisscrossed the sky above his position is a weird sort of air-to-ground-to-air battle. From their position, the vehicle commanders of the mortar section opened up on the Hinds with their .50cal machine guns; Parker, seeing the Hinds being taken under fire, shifted his target priority toward the incoming fast movers that were vectoring in on the Cobras, and launched four Stinger missiles; 3 Soviet Gremlins also streaked towards the gunships, forcing them to dive for cover behind the trees. Their radical evasive maneuver forced the Su-25s to adjust their own attack run just as the Gremlins and Stingers arrived at the same time in the same air space. No one is certain who did what to whom, but when the missile contrails cleared and the echo of explosions faded, one Frogfoot was falling from the sky, the second beating a hasty retreat, three Hinds were reduced to burning hulks in meadow, and both of Assassin’s gunships peering cautiously over the tree tops to locate their next targets. 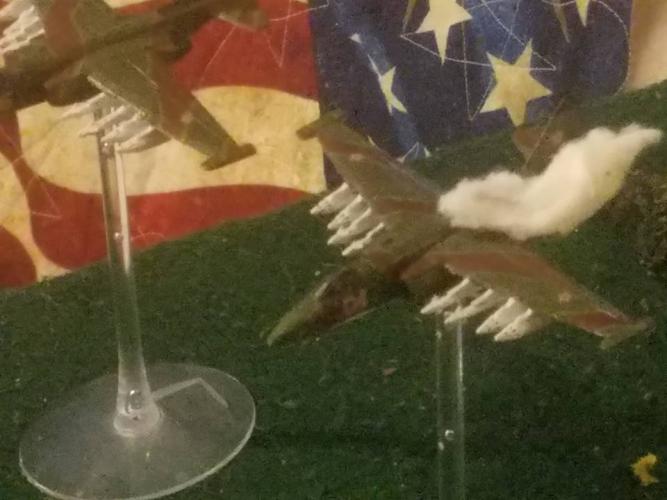 Satisfied the Soviet air cover had been effectively nullified, Brinkman ordered a general advance. Ball began moving his platoon toward the Upper Bridge. Second Platoon and 1-41 Infantry continued their advance from the south, pushing the enemy infantry into the town center. Artillery fires were shifted to the town center, reducing it to rubble. Assassin moved to engage the last Hind, but changed targets to engage the T-72s moving to engage Glover’s tanks as they entered the southern edge of town, killing one and bailing another. 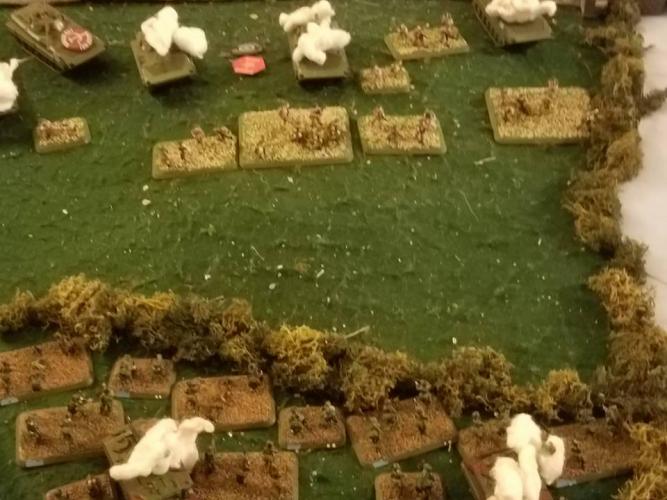 Warthogs rolled in to finish-off the tank company with their own Maverick missiles, destroying another 2 enemy tanks. 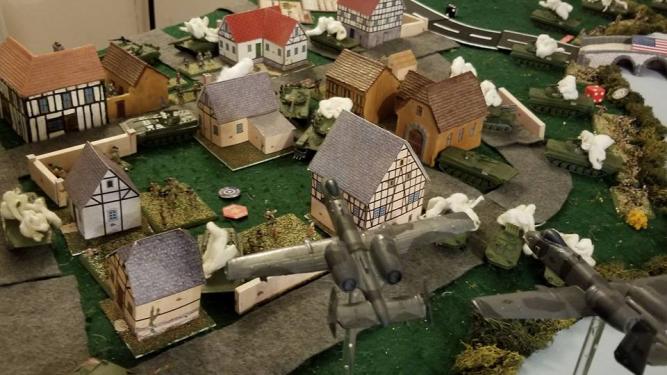 Enemy return fire began to dwindle and the fighting fizzled out as the Soviet commander wisely withdrew. Over the radio, Brinkman could hear reports of friendly forces approaching from the west.

His plan had worked, somehow.

Captain Brinkman turned to his radioman. “Hide your crayons,” he said with visible relief. “The Marines are here.”