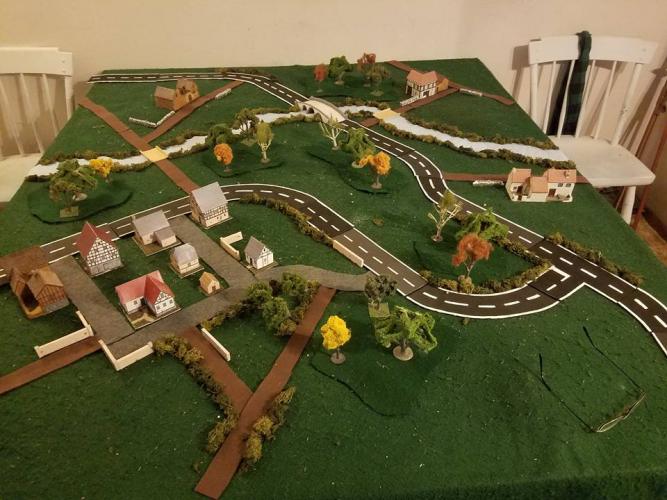 View from the South

Major Puller is convinced he is becoming a vampire. He couldn’t remember the last time he enjoyed the warm sunlight for more than a few fleeting minutes before getting some shut-eye before a predawn movement or attack. He knew war was a 24-hour ordeal, he just wasn’t happy about always working the night shift.
The latest orders to come down are no different. Since the enemy had cut the supply lines from Hof into Leipzig, operations in Leipzig had to be supplied over the beach-head in Hamburg and through Hanover. Puller’s task was to make the final push to secure those supply routes. 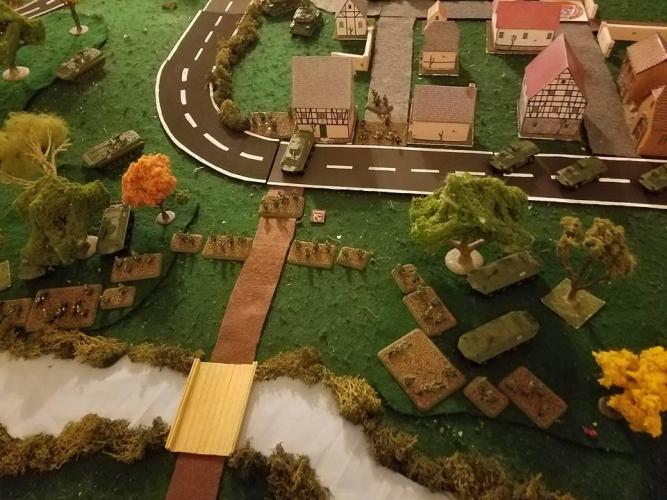 Soviet deployment to the west 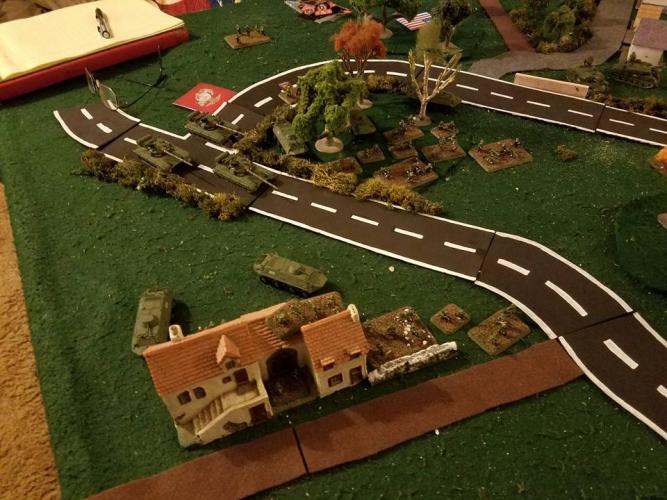 Soviet deployment to the east

Kilo Company is to conduct a night attack against Soviet positions in the vicinity of Milzau along Route 38. The Company was not to become embroiled in a prolonged engagement, but to pierce the enemy’s defenses, move swiftly down the Autobahn to link-up with Army units approaching from Route 9. The bypassed enemy troops will be dealt with by the battalion’s follow-on forces. 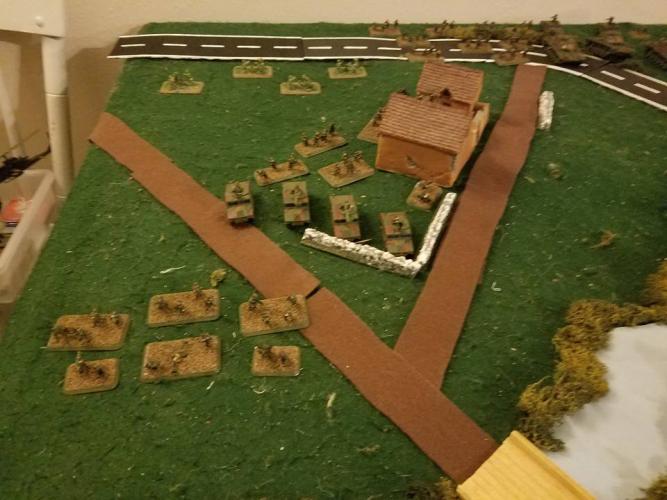 Marine deployment to the west 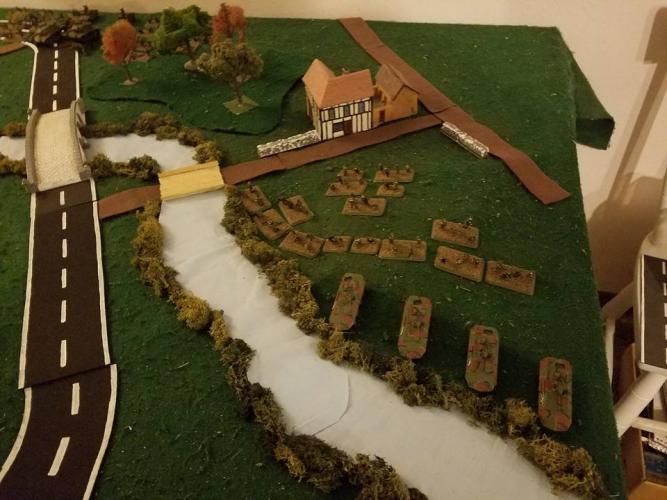 With his plan briefed, Kilo Company moved out, and took up their positions. Puller knew the cover of darkness would provide his attack with cover and an element of surprise, but Marines, especially Reserve Marines, are ill-equipped for night actions when compared to the Army. They have all the high-tech night vision goggles and infrared sights and laser rangefinders. His night fighting equipment wasn’t much better than a broken flashlight with dead batteries and a book of wet matches.
Just once, he thought, I’d like to enjoy the daylight.
With the company in position on the north side of a shallow canal, it was ready for action. Only a couple hours ‘til dawn, Puller thought. Let’s get this over with.
Puller keyed the handset on his PRC-77. “All MAKO units,” he said, “Move out.” 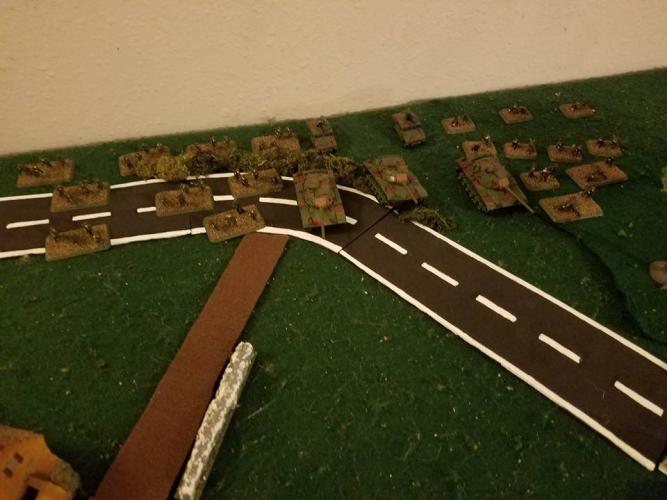 And so it began. An artillery barrage began slamming into a small farmstead opposite the canal from Hawkins and Kassel. Third Platoon and the LAVs joined in the cacophony, punching holes in the farm house, blasting chunks of plaster, and splintering wood from the exterior walls. The damage to the cottage was extensive, but there was no way to ascertain the effect on the enemy. 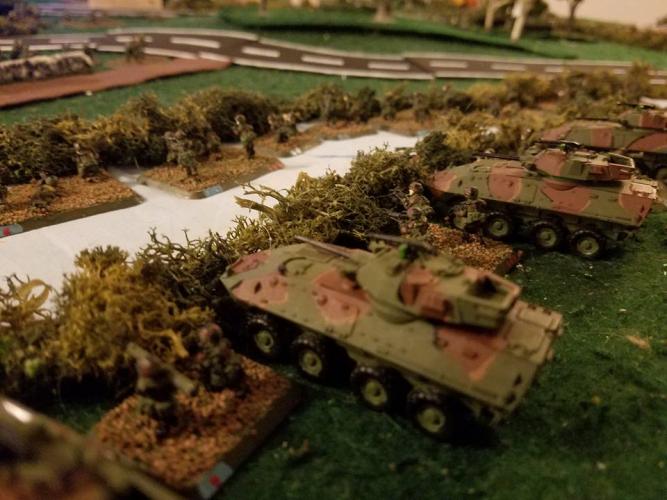 Not to be outdone, Butler’s 2nd Platoon and Gunny Daley’s CAAT section began hammering away at the woods opposite their position, scoring a hit on a BTR. Screaming and crying from across the canal told Butler his men had been deadly on target. Both mortar sections began dropping rounds in front of Butler, contributing to the death and mayhem across the canal. 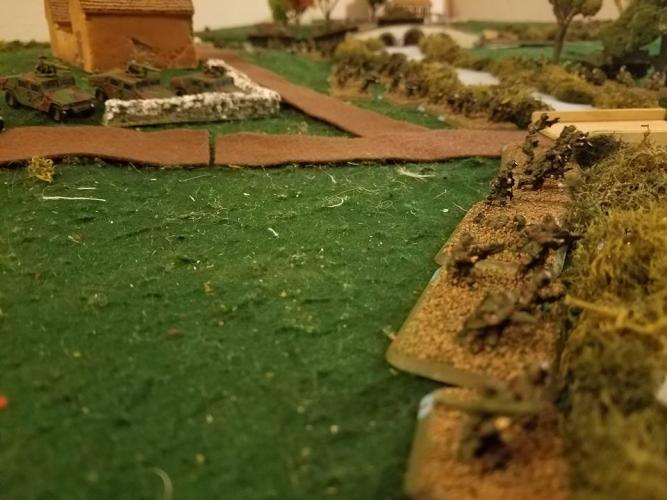 Basilone’s tanks cautiously moved over the bridge, supported by 1st Platoon to his right and Puller’s HQ to his left, when the lead Patton suddenly stopped and fired. A bright ball of flame shot into the night sky as the other two tanks located and engaged the same target. In short order, Puller could see three burning BMPs in the distance. 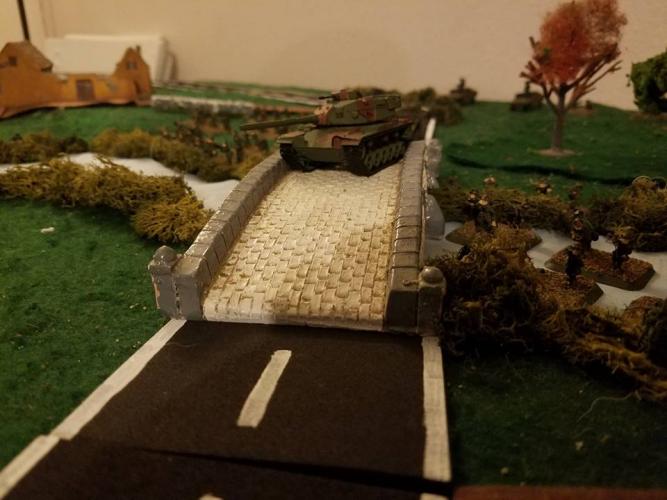 No doubt the enemy knows we are here, Puller lamented. Now comes the inevitable payback.
It did, indeed, come, but to Puller’s surprise, was astonishingly lackluster, sporadic, and feeble. Expecting a reinforced company to his front, the return fire amounted to little more than a platoon or so. Only the chunkchunkchunk of a Soviet automatic grenade launcher answered 2nd Platoon’s devastating fire while Spigot missiles streaked skyward over Hawkins’ attack.
Either there is only a platoon here, thought Puller hopefully, or we caught them asleep. Whatever the case, Puller wasn’t going to let this opportunity slip past.
“We caught ‘em flat-footed!” he excitedly shouted at his radio operator. “GO! GO! GO! Push ‘em hard and don’t let up!”
The young Lance-Corporal understood the Major’s intent and keyed the handset. “All MAKO units. MAKO 6.” A pause as he released the key, then pressed it again with a wry grin. “Sick ‘em.” 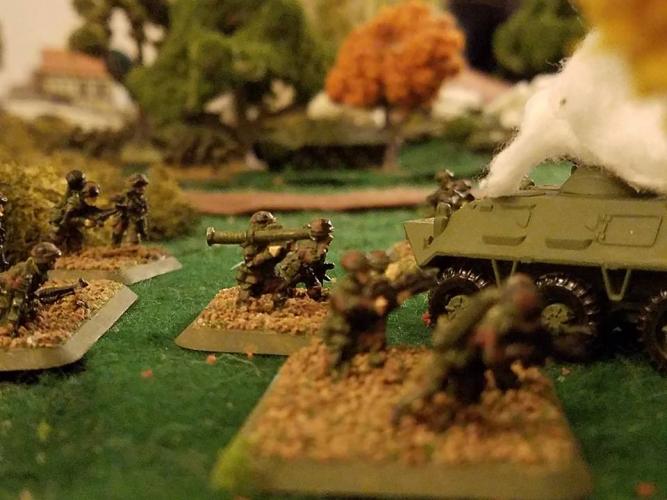 2nd Platoon attacks into the woods

With parade-like precision, the Marines of Kilo Company all at once stormed across the canal, delivering accurate suppressive fire as they advanced. Second Platoon SMAWs and LAWs knock out four BTRs hidden away in the woods as the riflemen swept the shaken enemy platoon away with a reckless bayonet charge. 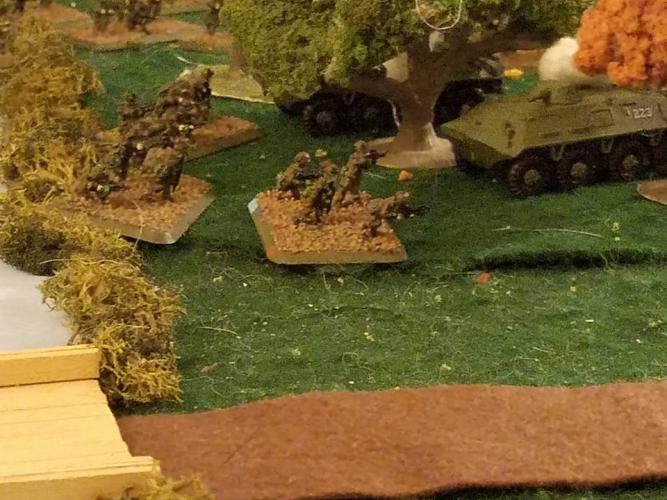 Third Platoon also charges across the canal toward the farmhouse, covered by a hail of rifle and SAW fire. Kassel’s LAVs sweep around the east side of the house, destroying the two BTRs parked behind and pumping 25mm rounds into the house as they went. Much to their surprise, no return fire came from the farmhouse. Terrified Soviets bolted out the back door, only to be mowed down by the LAVs’ machine guns. As Third approached to secure the cottage, the smell became overwhelming. Peering through the shattered windows, the blood-spattered walls and chunks of meat reminded the Marines of a slaughter-house. 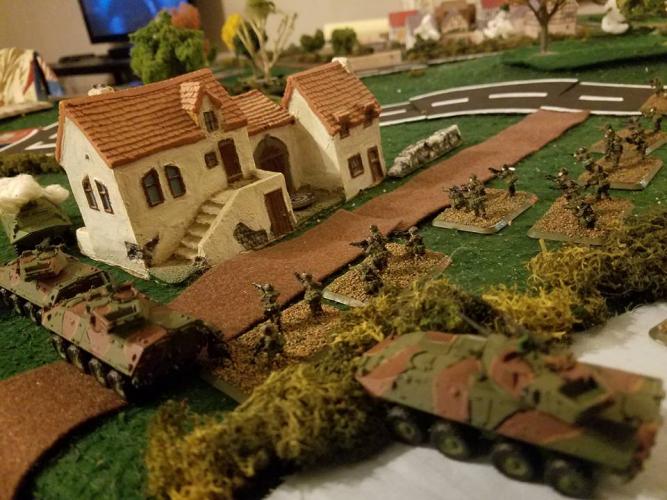 Assault on the Farm

“Tanks! Tanks, direct front!” came the frantic call over the company net. Basilone’s lead Patton had spotted three T-64s approaching from the south. The lead Patton rocked back as it engaged, scoring a hit on one enemy tank, unclear of its destruction.
“Triple A! Right! Two o’clock!” The two following Pattons traversed their turrets and serviced two ZSU-23/4 tanks in quick succession. 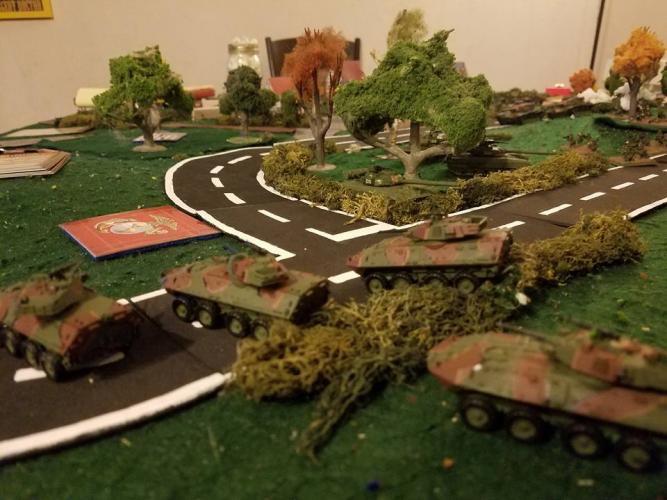 Kassel flanking the Farm and dashing for the Exit point

“They’re running!” reported Kassel. His LAVs had sped around the cottage and were preparing to engage another enemy infantry platoon to their front when, to his surprise, they broke and ran. Through his sights, Kassel could see a Soviet officer, he assumed a Political Commissar, trying to stem the retreat only to be brutally cut-down by the terrified soldiers trying to flee.
With their infantry support evaporating, the T-64s began to fall back along the Autobahn, taking up a defensive position in a small copse of trees. They attempt to engage the advancing LAVs and infantry, but fail to have any telling effect. 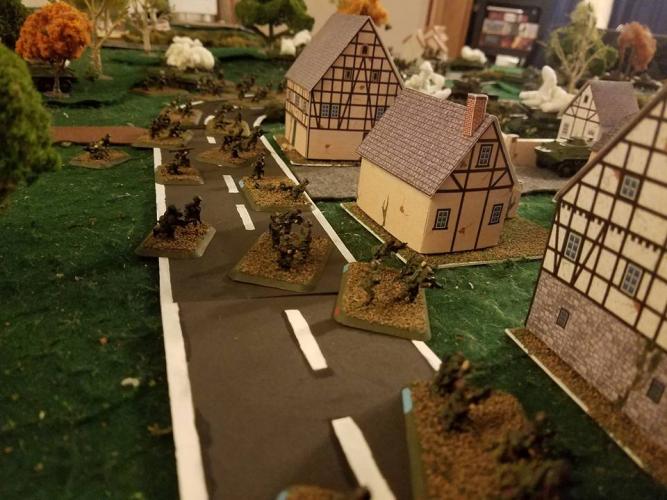 As dawn began to break over the battlefield, Butler’s voice sounded almost giddy when he reported pursuing the enemy into the streets of Milzau. His Marines poured well-aimed rifle fire down the thoroughfares in well-rehearsed standing, sitting, and off-hand stances as if they were on the rifle range for their annual qualifications. Second Platoon’s rocketeers again took a heavy toll, knocking out another BTR, a pair of Spandrels jammed up in the middle of the street by burning wreckage and their own haste to escape the carnage. 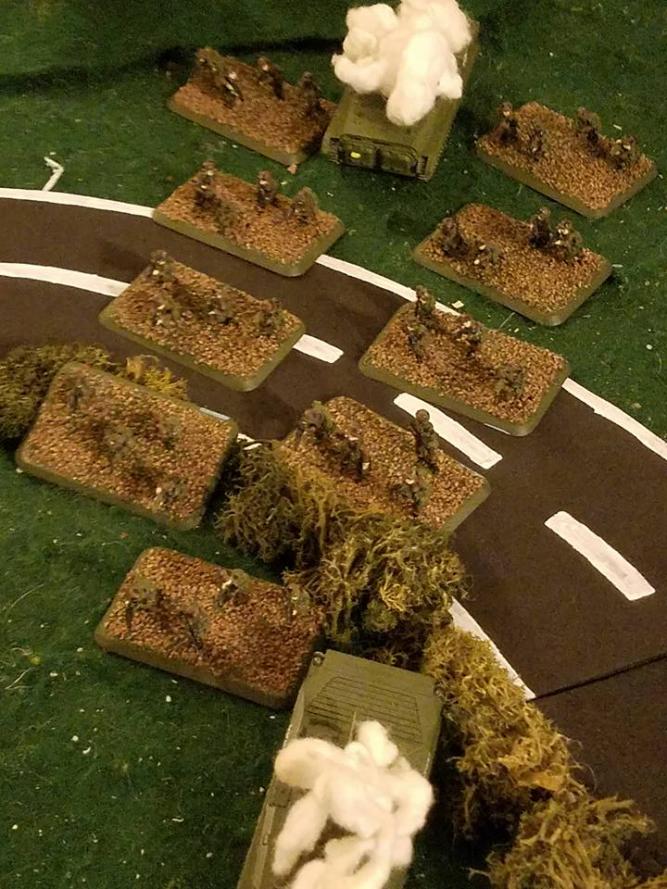 First Platoon obliqued to the right, tying into 2nd Platoon’s flank and entering the town from the east, catching the retreating Soviets in a nasty crossfire. Puller moved the HQ section to a small hillock, overlooking the town to the east and the T-64s to the south.
“Machine Guns and SMAWS here,” he ordered as he pointed to concealed positions to provide suppressive fire toward the town. “Keep their heads down and blow up anything they hide behind.” Puller spun around to his Dragon teams and pointed to the southern slope of the hillock. “Set up there. Kill those damned tanks.” 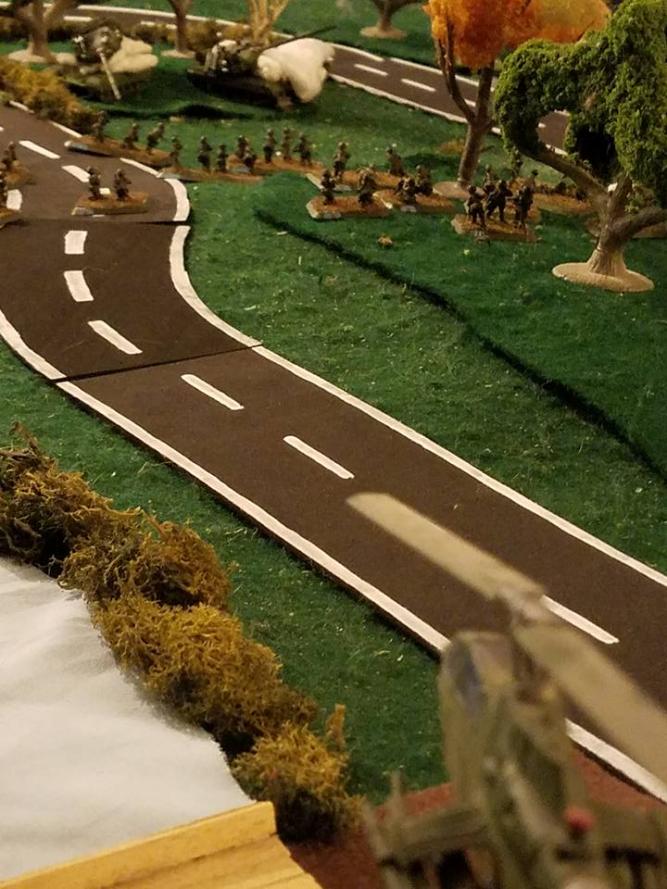 Cobras engage at dawn (Puller can be seen under the tree, personally directing his Marines)

“MAKO 6. MAKO 6. Gunrunner. Over.”
“Gunrunner. MAKO 6. Break.” Puller could hear the whoopwhoopwhoop of the Cobras approaching from the north. “Tanks under cover. Southeast woodline. How copy? Over.”
“Solid copy, MAKO 6. Engaging.” 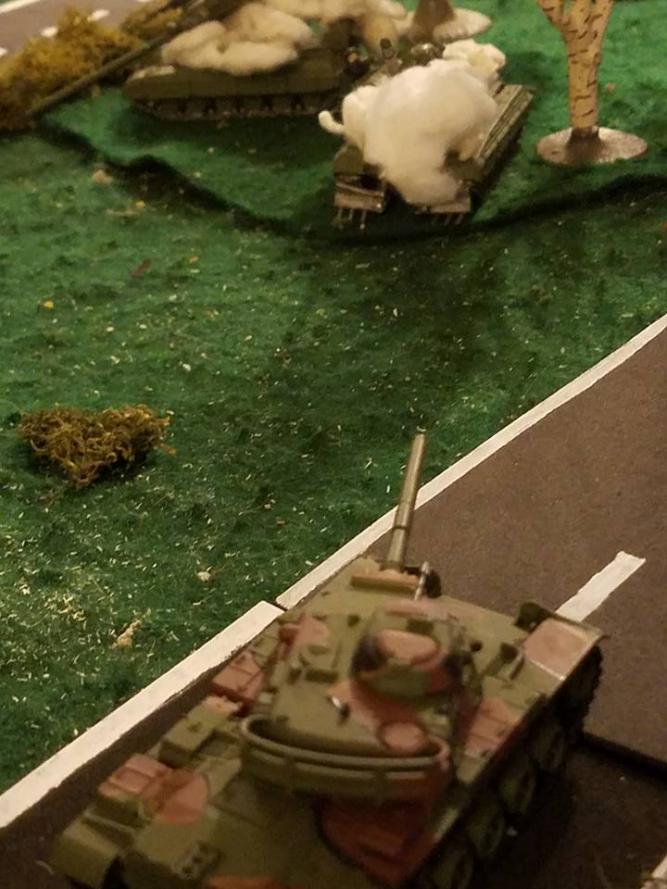 Puller turned back to the south as he heard a pair of TOW missiles flew overhead, knocking out one of the T-64s. Immediately following, Basilone’s tanks engaged and destroyed a second T-64. Deciding enough was enough, the last T-64 abandoned the field. 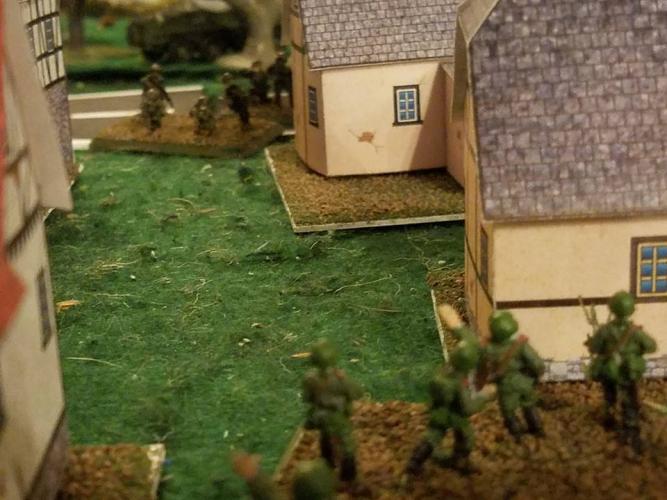 Puller dropped to the ground, pulling his Kevlar off, and wiping the sweat from his forehead. It was now that he first noticed the rumble of artillery from the south. His day was not over yet.
“First Sergeant. Stay here and make sure the wounded get evac’d. The rest of the company is moving out ASAP. We have to link up with the Army by dark. Catch up when you’re done.”
“Aye, Sir,” responded the First Sergeant as he began to walk away.
“And one more thing,” Puller added. “India Company is supposed to finish clearing this area before supplies begin coming through. When the trucks do get here, be sure those hyenas don’t ransack the MRE’s. I’m getting really tired of Tuna and Noodle.”
“Aye, Sir,” smiled the First Sergeant.