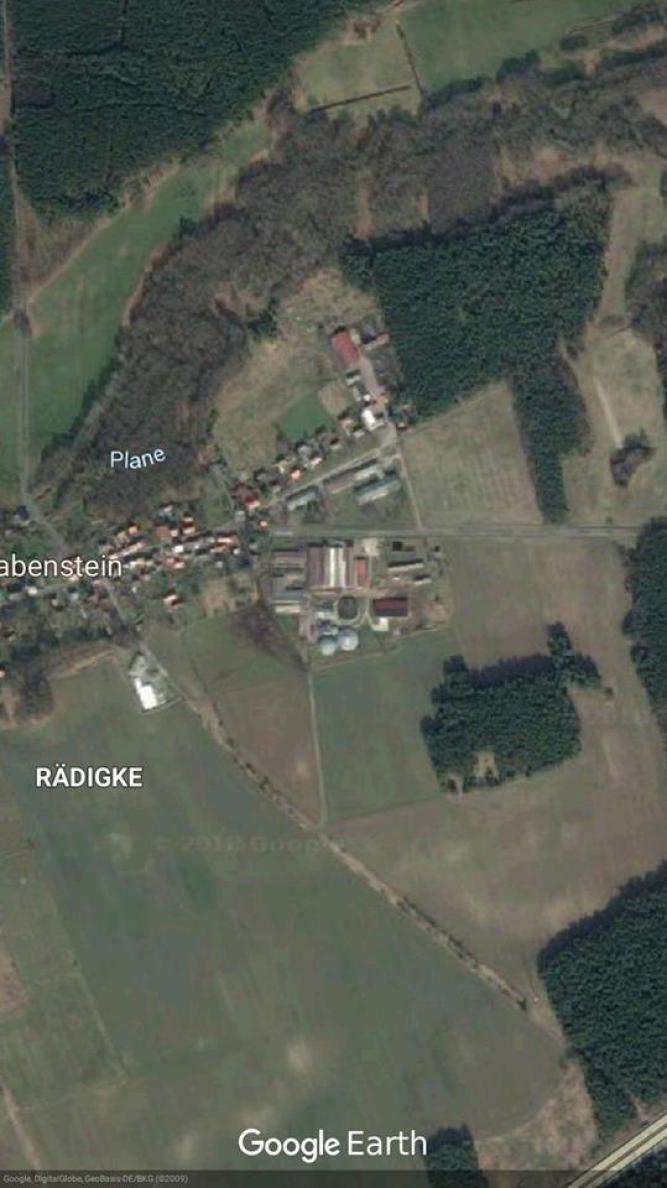 Satellite Imagery of the AO 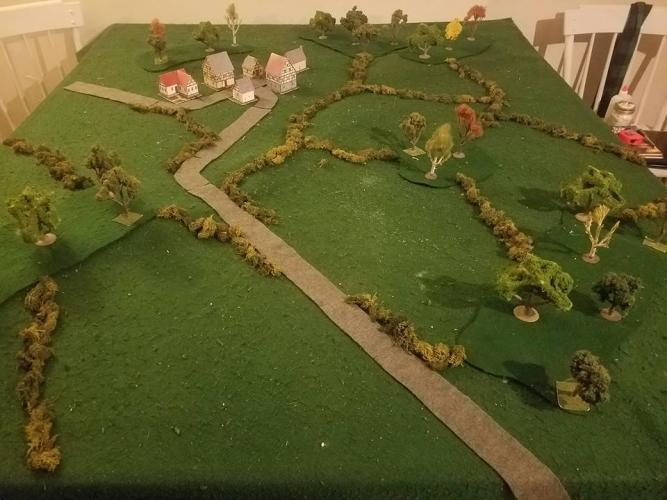 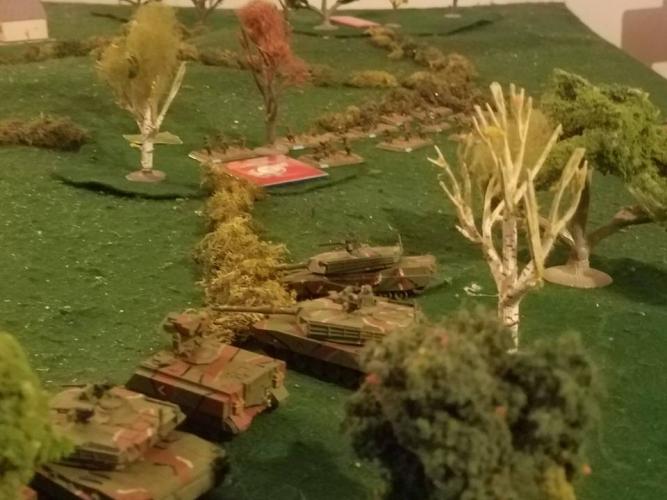 US Deployment after Spearhead in the Southeast corner; Light Platoon secures SE objective 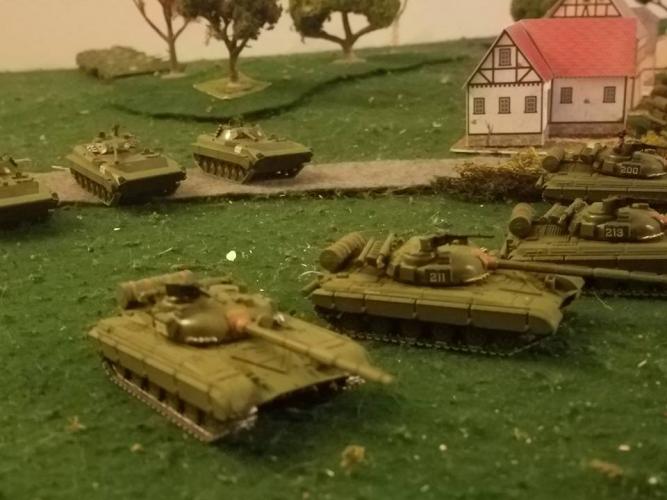 Soviet deployment after Spearhead in the NW corner; T-64s secure NW objective in the village

Lieutenant Putnam was surprised at the aggressiveness this Soviet commander and was beginning to doubt his odds of survival. Ordered to recon ahead of 1-16 INF, he only commanded a small Cavalry troop of Scouts, one platoon of tanks, and a platoon of light infantry. To his front, he could see through his thermals a company each of those damned nasty T-64s and BTR-mounted infantry spreading out in front of his position. The infantry were skirting around his right flank while the tanks came straight for him. He suspected a Recon platoon of BMPs lurked somewhere to his left, trying to turn his flank.
"I have a bad feeling about this," he said to his gunner. 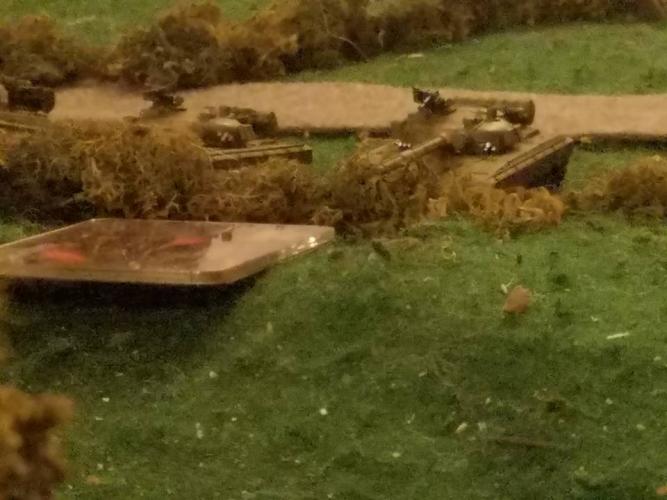 T-64s move toward the central objective on the ridge line . . . 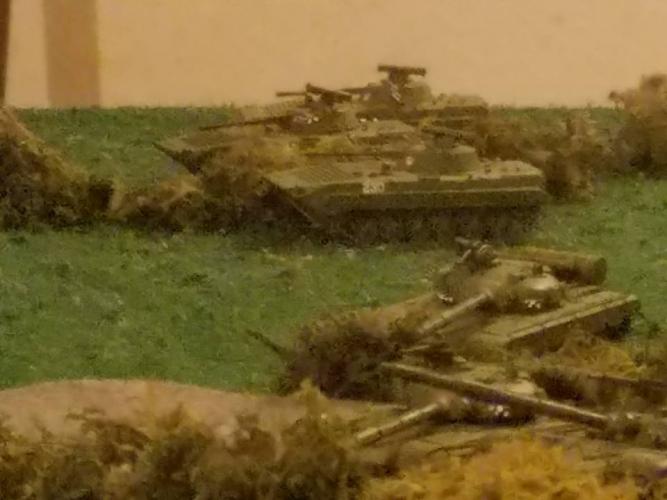 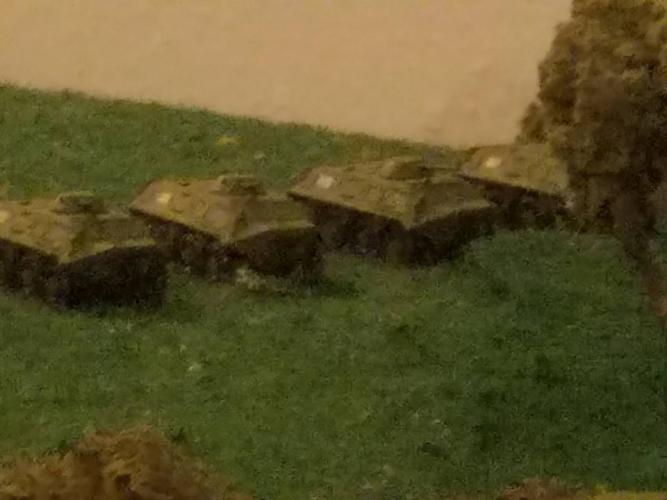 . . . and infantry moves around his right.

Deciding not to get caught in a pincer, Putnam decided to do what cavalrymen do best--attack.

Lieutenant Plumb-Martin's Light Platoon was ordered to move straight for the central ridge while Putnam's tanks provided over-watch. To the left and right of Plumb-Martin, the Scout sections secured his flanks. 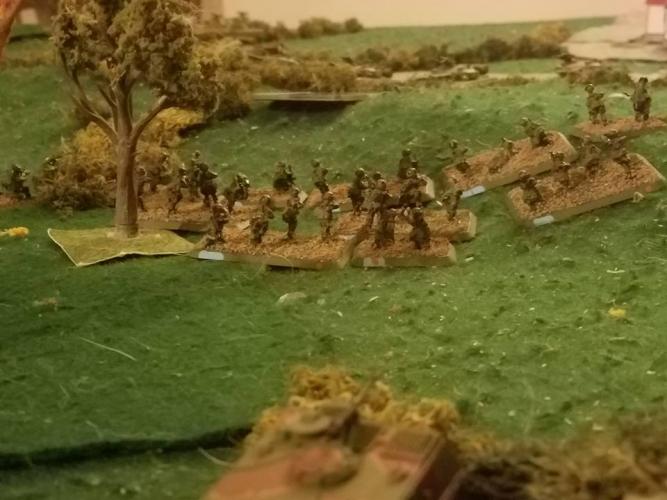 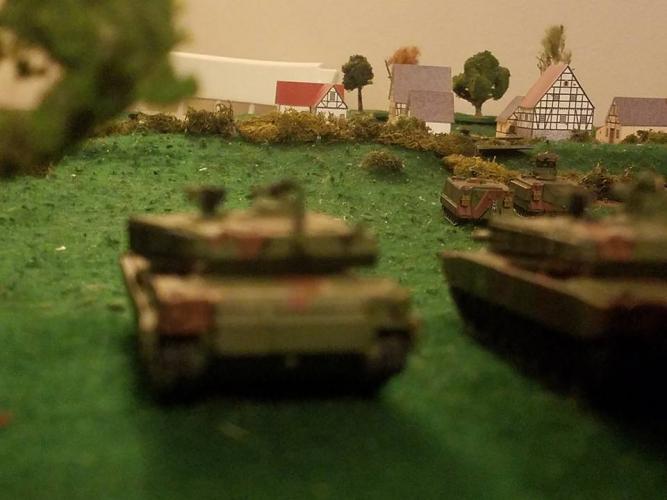 Both Putnam and Plumb-Martin were surprised at the appearance of five T-64s as they crested the central ridge.

The Soviet crews must have been equally surprised to see Americans appear suddenly before them The gunners fired a rushed volley at Putnam's tanks, the shots sailing harmlessly overhead.

Inexplicably, the tanks stopped. They must've seen the infantry, thought Putnam. But none of the tanks' machine guns fired. They are lining up for a better shot, Putnam concluded. They don't see the infantry.

Putnam sensed this was his opportunity to punish the enemy such a crucial mistake. 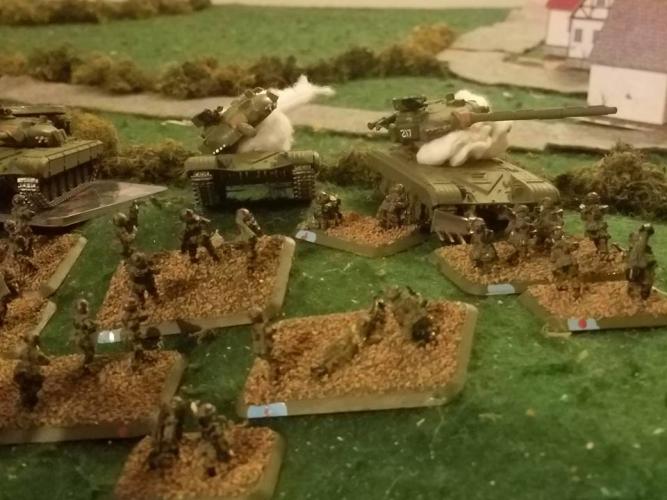 "All Bandit units. Open Fire!"
Putnam felt his tank rock from the recoil of the 105mm, kicking up a cloud of dust in front of his viewports. Once the dust settled, he noted his platoon had claimed three of the beasts while his scouts had killed a fourth and damaged a fifth.

Emboldened by their good fortune, the Light Platoon obliged, charging in among the T-64s, finishing off the bailed out crews. 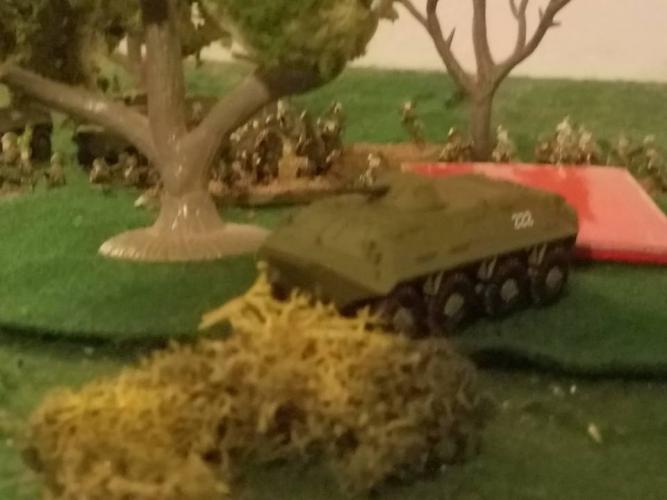 Putnam did not have time to celebrate his victory. His scouts reported enemy BMPs moving into firing position in the SW woods while their infantry secured the NE woods. 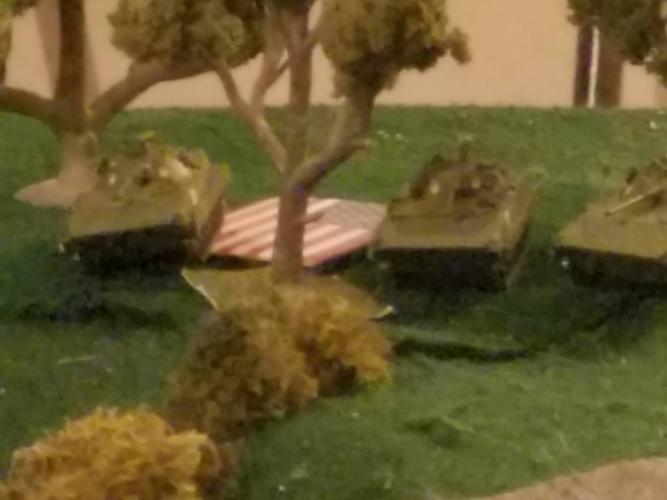 A pair of Spandrel missiles streak from the western trees, knocking out one of the Scout 113s, forcing the ITV to retreat. Putnam decided he needed to deal with that threat directly. The infantry will have to hold the central hill. 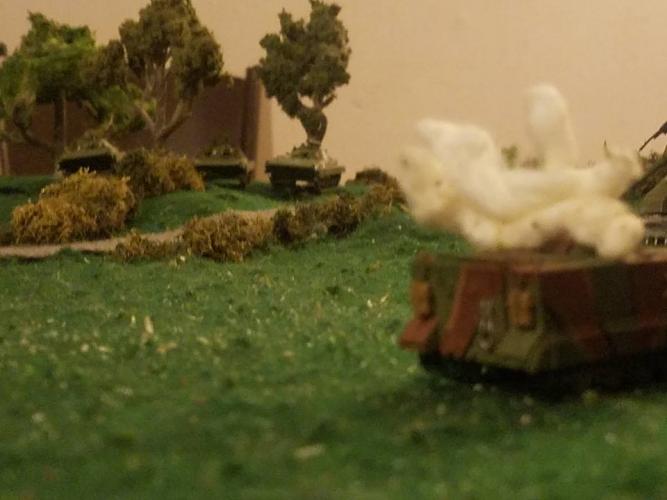 Scout 113 falls to BMPs on the flank. 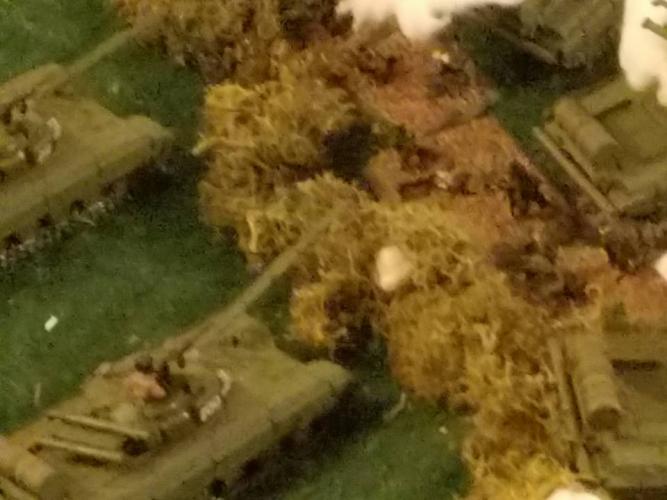 "More tanks!" shouted Plumb-Martin over the company net. "Coming straight for me."

The young Second Lieutenant was obviously shaken. "Calm down, Delta 4-1. Mix in with the wreckage and they'll have a hard time seeing you. Chances are they still don't know you're there. When they get close, kill 'em."

Putnam peered through his binos and felt a small relief. "There's only two of them, 4-1. You got this." 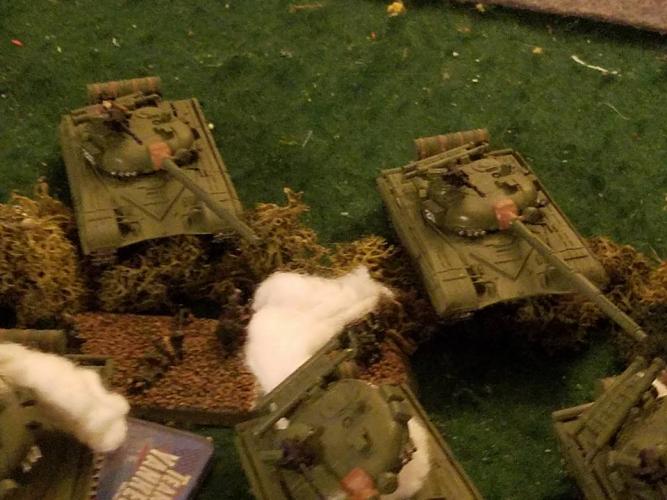 Not repeating the same mistake, the tanks laid down heavy machine gun fire and charged straight into Plumb-Martin's position. 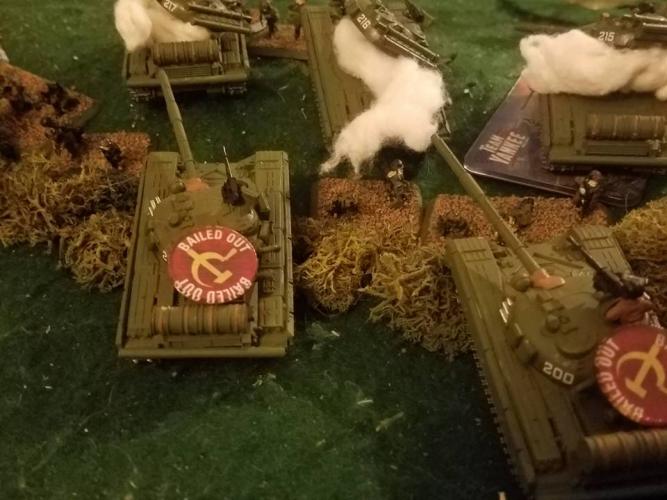 The last of the T-64s are knocked out as the Light Platoon consolidates their position.

But the young officer had quickly regained his composure and kept his men down while his Dragon gunners lined up their shots from the top of the ridge. In seconds, both T-64s were disabled, and their crews finished off as they tried to escape.

The BTRs on Putnam's right poke their noses out, but are met by the 2nd Scout section who looses a TOW and claims an enemy vehicle. 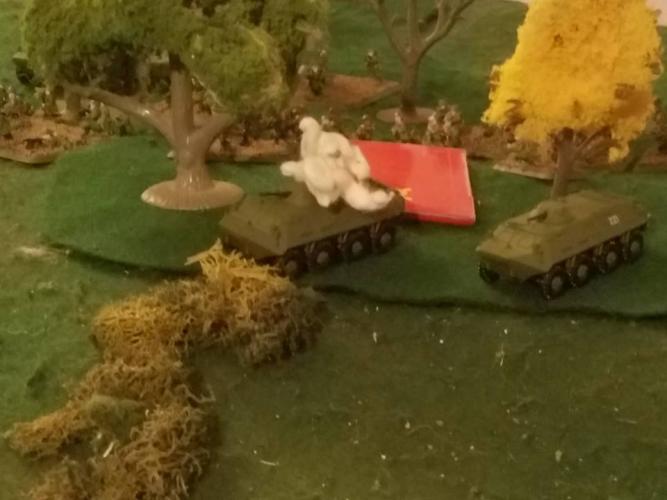 BTRs having a peak before they get their noses swatted.

With the central hilltop all but secured, Putnam decides now is the time to deal with the troublesome scouts. He orders his tanks to charge across the open field and engage at point-blank range. 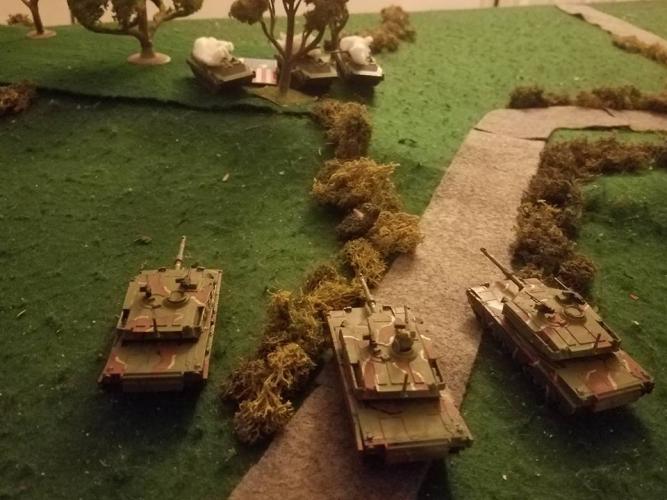 The BMPs don't stand a chance against Putnam's charge.

The Soviet infantry, trying to contain the Americans' initiative, move up to engage the Light Platoon and 2nd Scout section. Their fire is enough to inflict minor casualties on the infantry, pinning them down, but the BTRs only manage to bail an ITV. 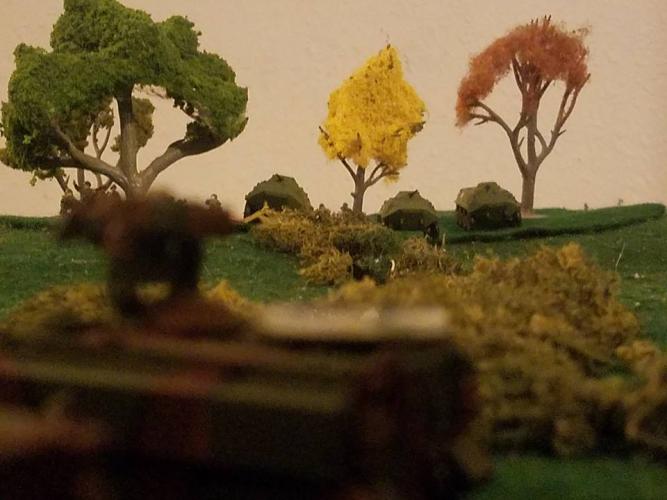 An ITV is bailed out by Soviet return fire.

Undaunted by the BTRs, the ITV crew remounts and joins their section leader in a mad dash for the village. 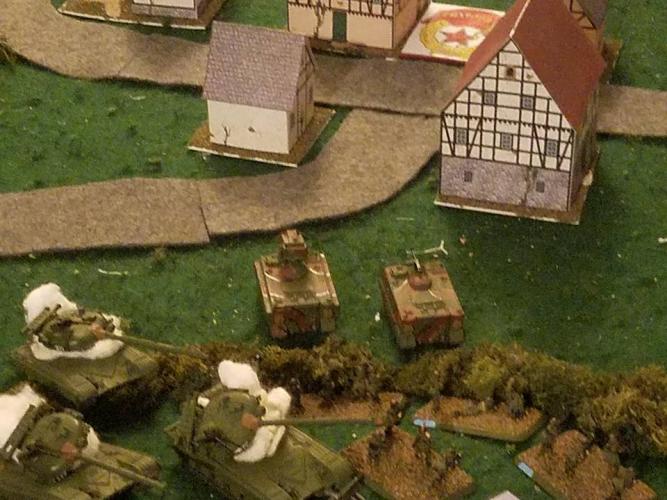 Putnam moves his tanks onto the SW objective, ready to support his scouts' dash into town. But the enemy does not challenge him.

In the distance, he can see what his scouts are reporting . . . the enemy infantry is retiring to the northeast . . . they've had enough for one day. 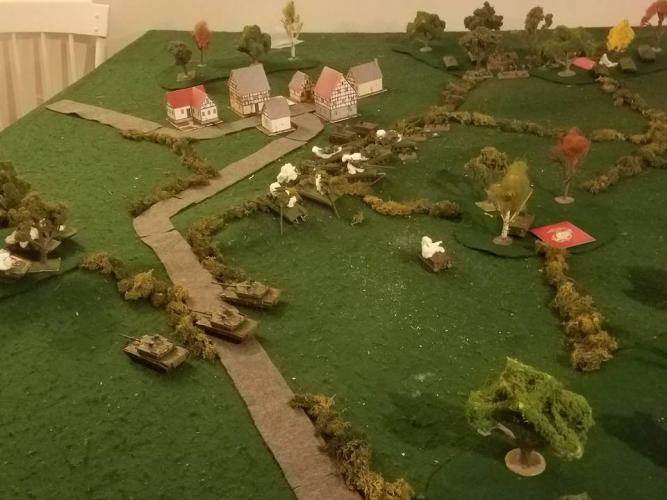 This fight was much closer than it seems. From the outset, I was on my back foot as the Soviets quickly secured two objectives before my first turn.

Rushing the infantry up to challenge the center objective seemed suicidal, but I had no choice. The fact that my opponent did not assault them when he had the chance proved to be pivotal to the outcome--which is why he was determined to not make that mistake a second time. Unfortunately, that second assault failed to pin my infantry, and my Dragons happened to be positioned for side shots.

From that point, things rapidly spiraled out of his control.