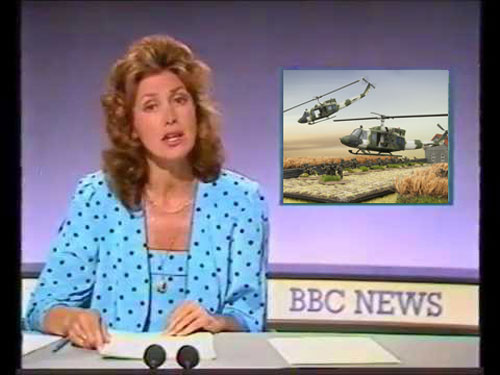 As NATO forces progress deeper into Soviet-held sectors, we are finding more and more people fleeing to the West for a better life.  I sat down with one of them and asked him about life on the other side of the wall.

[Cut to a sit-down interview, Peter starts talking and a translator’s voice narrates his words]

Life was not so terrible, but you always felt watched, and judged.

You never know when you would say the wrong thing or befriend the wrong person.

[Peter pauses looks down, then back at the camera]

But for me it was being cut off from the world, not being allowed to see family who is just behind the wall. You start to wonder if you will ever see them again.

But then the war started, the news tells us that NATO was poised to strike, but we know better. The Soviets like control, they like to dictate how people should live. So we knew it was just a matter of time before they decided they wanted all of Germany. 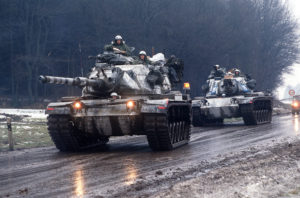 [Returns to Sally in a hotel room]

The fighting still goes on, and as we progress into Dresden we are finding more and more refuges trying to escape this war.

Now more than ever we need to press forward to keep the Soviet invaders at bay.  They may have started this war, but they will soon learn that no amount of power and land is worth the bloodshed and misery they have spread across Germany. Their lust for power and control is something that we cannot bow to. We will stand up strong, we will push back the aggressors and we will put an end to this pointless war they are determined to wage.

We have started taking the fight to Denmark, Dresden and other sectors in hopes to push the Warsaw Pact forces back into Poland and Czechoslovakia.

Still fighting the good fight, this has been Sally Sparrows, BBC World News.