US Marines attack towards the East German border.

The big news today is happening in the north. The Dutch I Corps , German I Corps, and a contingent from the US Marine Corps have crossed the old border with East Germany from Hamburg into Brandenburg. In doing so, they are opening a second thrust on Berlin in a giant pincer move that, if successful, will entrap the entire Soviet Group of Forces in Germany.

This attack has collided with a Soviet counterattack towards Hamburg from Schleswig Holstein. It appears that most of the troops involved have come from the forces occupying Denmark. There are reports of outbreaks of fighting in Denmark as soldiers and civilians who have been in hiding have launched scattered attacks on the remaining garrison.

All in all, the situation in the north of Germany is very confused. 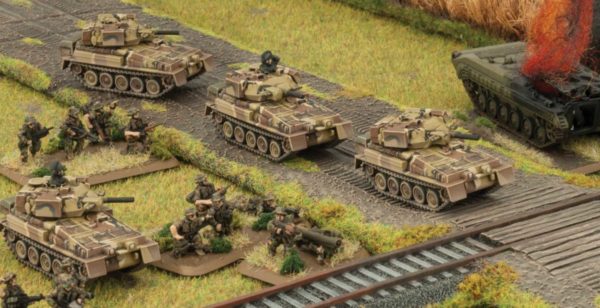 Meanwhile, the Warsaw Pact forces in Amsterdam and the Ruhr have responded to being cut off by NATO forces with renewed attacks. The ANZAC Brigade, part of the British II Corps, apparently had it’s efforts to resupply interrupted by an urgent request from the US 1st Cavalry Division for additional troops to hold an East German attack across the Maas. The counterattack apparently cleared up a considerable bridgehead across the river.

In the Ruhr, the Warsaw Pact forces have been launching non-stop attacks to link up with their forces around Frankfurt. So far the Canadian Battlegroup and the bulk of British II Corps have managed to keep the route to Hanover open, but have lost much of the ground recovered in recent days. It will be interesting to see if the Soviet forces can continue to make headway as their stocks of fuel and ammunition run low.

The US effort has focused on re-opening the thrust from Leipzig to Berlin. The fighting here has been heavy and incredibly bloody, with neither side gaining a decisive advantage, although the Warsaw Pact forces here have been gaining ground slowly.

In the south, a surprise counterthrust by Warsaw Pact forces has penetrated deeply into the West German defences. There are hopes amongst the NATO commanders that the French will intervene to help stabilise the situation.